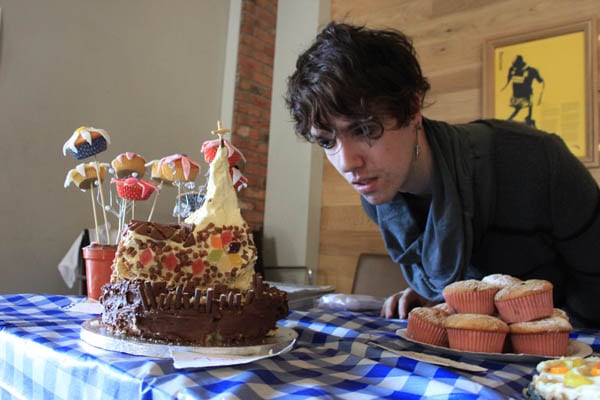 They came from far and wide; the brave and the bold, the hungry and the famished. All to compete in what was is now infamous Mancunion Cake-off. As part of student media week the paper organised the event on Wednesday 2nd March in the union bar. It was to be contest of intense cake talent. Every last competitor was viciously compete, no one wanted to lose, every one wanted to win – to be crowned cake champion of the union.

The initial preview of the cakes garnered a lot of attention from other patrons of the bar, all gazing at the doughy creations in awe. Still, no one was able to have a guess at who would come out on top. Amongst the Godzillas and Gadaffis , there was an amazing entry by a one Sam Bernard, a multi-layered monster church cake.

And so the judging began, there were three categories that each cake was meticulously inspected on: taste, aesthetics and extravagance. Taste was rated from vulgar through to exquisite; for aesthetics there were the hideous, the inoffensive and the objects of pure sex; and for extravagance there were the mundane, the individuals and the magnificent.

The judges tasted, they observed, they pondered, and worked their way through cake after cake getting closer and closer to finding the one that would be crowned champion and who would be immortalised in the Mancunion Cake-off hall of fame.

In the end it came down to three, Sophie Donovan’s ‘Currant affairs’ Gadaffi cake, Emily Oliver’s banana cupcakes and Catherine Sargent cupcake flowers. The room was full with sweat and nerves as the true victor was announced. So it transpired that the first legend of the Mancunion Cake off was Emily Oliver, her cupcakes had swooned the judges with their moist texture and creamy frosting.

However we shall never forget those brave men and women who entered the cake-off and made it the brain-melting awesome event that it was. Thanks to every one who came, even those who may have not won, your spirit will live on, with the hundreds and thousands in heaven above.