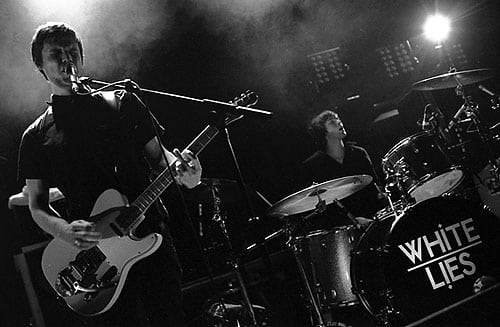 White Lies return to Academy 1 tonight after a near two year absence, suffering from a severe case of ‘second album syndrome’. Their sophomore effort, Ritual, has been in stores roughly a month and was met with decidedly mixed reviews – I certainly wouldn’t recommend picking up a copy if you’re hoping for a major departure from their 2009 debut.

Tonight’s performance, however, puts forward a very convincing case for the band’s continuing relevance, especially now that the appallingly fickle NME hype is but a distant memory. Ritual certainly seems to be an album that works far better live than on record.
Kicking off the set with habitual set opener ‘A Place to Hide’, the three-piece, tonight augmented by a further two members on rhythm guitar and keyboards, swiftly and seamlessly segue into ‘Holy Ghost’, the uncharacteristically forceful bassline and swirling guitars not at all out of place, especially when followed by the nearest thing White Lies have to a hit single, ‘To Lose My Life’. The setlist involves continued alternation between old and new, each track from the first album followed by a fresh effort, and it’s here that the new tracks really come into their own. On record, Ritual is hampered by a lack of urgency and the often arbitrary length of its tracks, but live the songs are faster, edgier and infinitely more exciting.
Tonight’s encore, especially, seems to demonstrate that White Lies’ considerable potential has by no means been diminished. Their debut single, ‘Unfinished Business’, proves that they’re fully capable of writing a punchy pop song whilst set closer ‘Bigger Than Us’ is unashamedly aimed at the stadiums that the band clearly still hope to reach. Their live show is already the finished article – they could just do with keeping their recorded output a little pithier and more direct.
Catch White Lies in an intimate venue while you can.