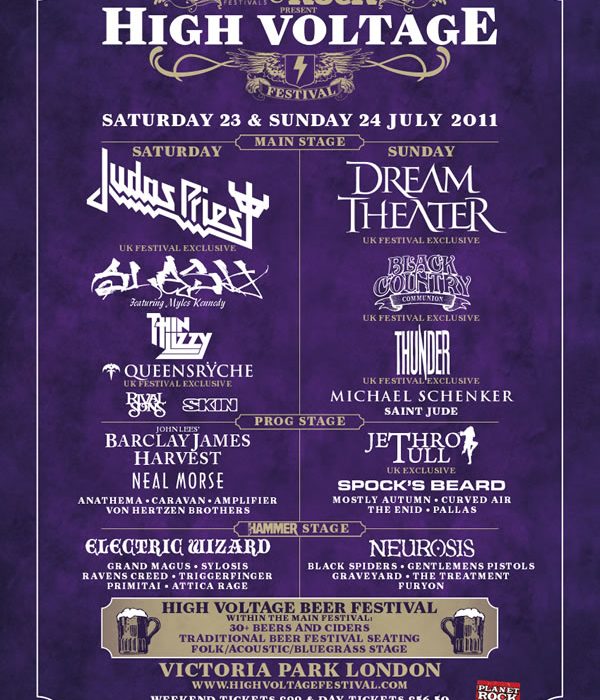 In only its second year, High Voltage has certainly targeted the dads market. With a line-up relying heavily on classic rock, prog and metal, as well as none of that tiresome camping malarkey, it’s not difficult to see why. Two days of legendary acts however, means that students shouldn’t shy away from a fantastic festival.

Last year saw the festival pull in some of the best live bands around, with ZZ Top, Clutch, Joe Bonamassa and a moving tribute Performance to Ronnie James Dio. 2011’s bookers have not been defeated by the daunting task of equalling its predecessor. Heading up proceedings on Saturday are one of heavy metal’s founding fathers, Judas Priest, playing what is billed as their final UK festival appearance. Despite the recent retirement of long standing guitarist KK Downing, they are certain to go out with a bang. Expect leather, high notes and ferocious twin guitar riffs. Sundays headline act are prog legends, Dream Theater, whose technical style has won them the accolade of being described as the metal version of Pink Floyd. Debuting a so far mysterious new drummer, their performance is certain to be huge. Also appearing on the Main Stage is former Guns ‘N Roses guitarist and everybody’s favourite top hat dweller Slash, continuing his collaboration with Alter Bridge vocalist and one time Led Zeppelin auditionee Myles Kennedy. Playing hits spanning his career, from GNR to Velvet Revolver to last year’s fantastic solo album, you never know who might make a guest appearance. Others on the Main Stage include the revitalised, but still swaggering Thin Lizzy, blues supergroup Black Country Communion featuring a returning Joe Bonamassa, Queensryche and making one off returns from retirement, Skin and Thunder; both of which will see an entire field mouthing chorus after catchy chorus.

Elsewhere over the weekend are prog powerhouses Jethro Tull, Barclay James Harvest, Caravan and Anathema on the aptly named Prog Stage, whilst the Metal Hammer Stage is headlined by sludge metalers Electric Wizard and Neurosis, with appearances from fast rising party rockers Black Spiders, Swedish stylings from Grand Magus and my personal favourites Graveyard with Gentlemens Pistols and Ravens Creed across the weekend.

As well as bands, High Voltage also hosts a couple of unique features. Firstly there is an Evil Knievel exhibition which is surely worth a look at for pure nostalgia. Secondly however, and most importantly, there is a beer festival with its own acoustic stage, which sounds like a pretty decent place to sit about if the stages aren’t grabbing your attention. It also means that if you’ve got to pay those festival prices for a drink, at least this time you’ve got some choice.

High Voltage may not have the traditional student vibe of a festival; with a basis more on a relaxing weekend than campsite antics though, you’re going to avoid the Sunday night hassle and not risk having your possessions thrown onto a communal fire by marauding gits. That and you can probably get your dad to drive you down.

Dream Theater – Pull Me Under