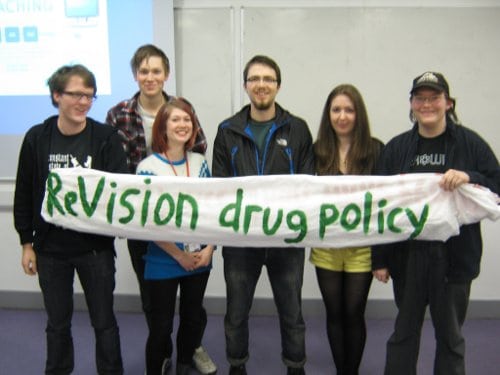 Re:Vision Manchester activists  believe that the current drug laws are harmful rather than helpful, that drugs should be treated as  a health issue rather than a criminal justice matter, and that the drug war criminalises and penalises innocent people, and their communities. In a time of cuts to public services, it is outrageous that the UK spends £13billion a year on trying to prevent people from using drugs. This has had little effect – since heroin was banned in 1971, use has risen by 1000%. Hysterical media reports result in bad laws hastily enacted: mephedrone was banned in 2010 because of tenuous links to the deaths of two teenagers who had taken mephedrone while drinking heavily. The autopsy subsequently deemed that mephedrone had not been responsible for their deaths, and the price of mephedrone has since doubled and is now being primarily sold by criminal gangs instead of recreational users – resulting in another drug in the hands of organised crime whose impurities compromise the health of its users far more than the actual drug itself.

As young people in whose name the drug war is often waged, and who are most often the targets of unfair, selectively enforced laws which do little to prevent harm from drugs, and in many cases increase it, it is vital that we speak out against this and do what we can to promote effective drug policies free from polical bias. A lot of the effort to bring about meaningful drug laws that are based in evidence rather than media headlines is to change the framework of the debate about drugs and how they should be treated.

To this end, we raise awareness of our cause through protests, stalls, film showings, informative talks, social events and anything else we can think of – this term, we are producing a comedic film about drugs and attitudes to drugs, which will be released in September 2011. Because drug law reform can only be achieved nationally, we also support the national organisation by contributing to national projects, such as research, website development, and making publicity materials.

There are many different faces of drug law reform, and so we focus to a large extent on what our membership for that year wishes to do. Because we have a lot of people interested in music, we have held a stall at the last five Pangaeas, and will be at the one in June as well. We have people from virtually every course, including Physics, Theology, Philosophy, Neuroscience, Maths and History. There is no typical Re:Vision Manchester activist, we are men, women, gay, straight, humanities, eps, and everything in between and beyond. You can smoke weed every day or believe that taking drugs is wrong – the important thing is that you believe that our current drug laws harm, rather than help, people.

There is virtually no group in Manchester that we cannot run a joint event with. We have done stuff with Openmedia, the Film Society, the LGBT Society, the Roscoe Occupation, the Disabled Action Network, Cool Runnings, the Drum and Bass Society, RAG, and Manchester Debating Union. If you don’t believe us, try us. 😛

We meet every Thursday at 6pm in the union foyer and have an ace meeting to plan everything that we get up to. If you would like to get involved but aren’t a Manchester student, or shortly won’t be, no fear! Check out our informative website at revisiondrugs.org and contact us to see what you can do for drug law reform.