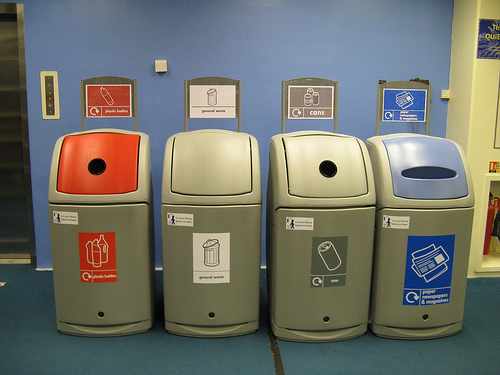 Our University campus is looking a lot greener these days (and that doesn’t mean grassy landscapes for sitting on!) Instead, Manchester has taken the environmental reins, instituting university-wide initiatives and fuelling student groups that bring attention to environmental responsibility.

It’s hard to miss the sliver boxes found arranged across the University campus: we’ve all familiarised ourselves with ‘blue for paper’ lid and so on. But could more be done?

An issue that arose when moving into University halls last year was that not all the halls offer recycling facilities for their residents. Would students care for recycling though? Halls of residents’ staff may ask (and wonder). Surprisingly, yes. Many residents organised rota’s between flat mates of who took down the paper and so on.

This is initiative taken by students without the prodding of green folk and their calls on being eco.

Students want to be considered ‘cool’ (so I’ve heard). But do they also want to be thought of as green, in the environmental sense of the word?

Various places in and out of campus have now introduced – and even compulsory in some catered halls- the ‘hug mug’. Does anywhere symbolise the throw away culture of cups more than the coffee shops aligned on the route to University? And that’s the point. Reuse your ‘hug mug’ (it’s quite cute really) and save the planet too! One cup at a time.

And as we’re all having to tighten belts a bit more than usual as students (you can thank the government for that), being green can help you save money too. One hundred odd quid on a bus pass for a year is feasible, but why not cycle instead. Campus has plenty of bike racks and stalls dotted around and this way, you can hit three birds with one stone (ouch): get to Uni, save money and of course everyone’s favourite, exercise!

It’s essential that the University aligns itself with other Universities across the country with a pledge to become more eco-friendly. If primary schools and secondary schools set up their own schemes, surely it’s a given we should too.

It’s the little things that count towards the big picture.