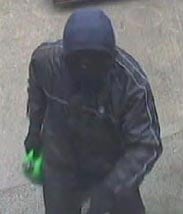 The green petrol can (above) was used as a weapon to threaten staff. Below: the other two robbers

Three armed men stole cash as it was being delivered to a post office in Fallowfield.

New images of the robbers show one man clutching a green petrol can, which was used to threaten a cashier and the delivery man.

Police have not confirmed how much money was stolen.

The robbery took place on the morning of 2nd September, no one was hurt.

After the robbery the men ran towards Scargill Close and Withington Road.

The branch of Tesco Express, next to Baa Bar, is used mainly by students during term time.

Police are urging anyone who recognises the men’s clothing to come forward.

Detective Constable Ian Wrench said, “Although no one was hurt, staff and witnesses were left terrified after the ordeal.

“This area of Wilmslow Road and Fallowfield was quite busy at the time so we are hopeful someone would have had a good look at the offenders.”