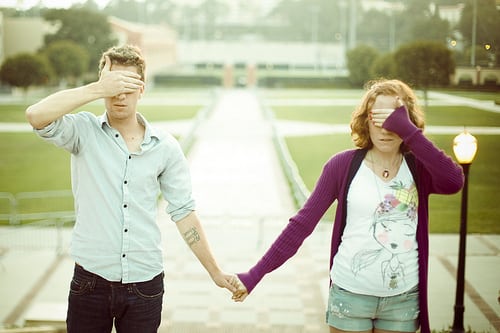 Would you rather know? Taken by Seth Rader.

As I lay in bed until 4pm, ignoring my pile of summer work (that should have been completed weeks ago) and instead choosing to dwell upon the situation I had managed to get myself into, I played out hundreds of different scenarios in my head as to what my life could potentially be like over the next year. I had somehow entered into, unknowingly, the infamous ‘open relationship.’

“You actually think this will work?,” “You really think you’re not going to torture yourself thinking who he’s with?” “Are you really happy about this?”

All the questions that I have been bombarded with since I informed our friends that this was our next move had caused me to step back and really consider what I was about to embark on.

Open relationships. Can they ever really work?

I hadn’t really noticed that this was what John and I had become. A trial period. An experiment. Perhaps even a desperate last attempt to try and fix what was crumbling apart. After an awkward and what seemed necessary ‘talk’, we found ourselves agreeing on having ‘more wiggle room’.

I evaluated, at the time, that this was a perfect plan. I had John in my life, as well as my rekindled love for flirting, dancing with and meeting new boys, no strings attached.

Yet, on this day, as I refused to leave the proximity of my duvet until I had come to a solution, I found myself moving further and further away from an answer. I was confused. What can I actually do? Was I even completely on board?

An open relationship allows for a relationship NOT to be exclusive, having (and promoting) the choice of seeing other people. Sex with other people is, obviously, an option, but not an invitation to bed anything with a pulse. More and more couples these days are throwing the traditionally sacred monogamy out of the window and embracing this new take on ‘love’. According to figures from the Office for National Statistics, the divorce rate in the country in 2009 had dropped to 10.5 per thousand married people from 11.2 in 2008.

Though (of course) many factors contributed to this descending number, it seems by adopting the more modern lifestyle, which includes getting married later in life (a rather large reason for less divorces) seems to play a key role in happier marriages. Jada Pinkett Smith and the Fresh Prince have seemed to (allegedly) supported this lifestyle, and their family unit seems to be working great, hair-whipping, kung-fu fighting kids and all.

Now these new-fangled relationships have various sub-categories: open and honest or quiet and discreet?

Which is more suitable? Would you prefer to know exactly what your partner is getting up to? Who he dates, who he kisses, who he sleeps with? Or would you rather not know what she is getting up to, avoid the pain and turn that oh so famous blind-eye?

Rapper Pitbull has been in an open relationship for nine years, and lives by the words, ‘Ojos que no ven, corazon que no siente,’ which loosely translates to “What the eyes don’t see, the heart doesn’t feel,” he says. “I’m not going to be worried about what she does when I’m not around. People are stuck on what’s normal, what’s right, what’s wrong,” Pitbull adds. “Well, maybe what’s right to you is wrong to me. What counts at the end of the day is everybody being happy.”

Is Pitbull right though? Surely, as the mantra all relationships live by goes, honesty is the best policy?

Well, I think, as young as we are, it would be too complicated, time-consuming and heart-rendering to know of each other’s antics, as the point of this is to help our relationship, not burden it.

‘Really? Is this REALLY going to help?’