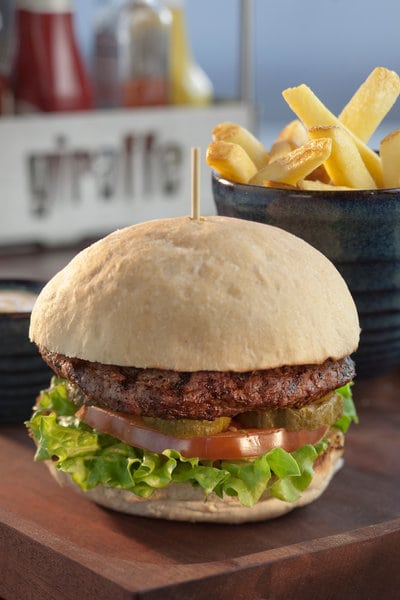 Dragging our bellies out of Giraffe with a (very nice) take-away cappuccino and a complimentary toy giraffe, my housemate and I concluded we were very contented indeed.

After being warmly welcomed, we perused the attractive cocktail menu in search of something refreshing. We settled on a Skinny Cucumber Breeze which matched cucumber well with gin and mint and a Tokyo Joe, featuring the Japanese rice wine sake as the ‘Tokyo’ slant on a fruity drink.

We noticed that some of their deals are worth a gander if you want to follow in my mighty footsteps and avoid Nando’s. Not only is all food 25% off from Monday to Thursday and Sunday after 6pm, but there are half price drinks as well – cocktails, beer and wine – on weekdays from 5-7pm and Burger Tuesdays, £5.50 after 5pm.

At first hungry glance, I became disillusioned with the many types of cuisine that are offered – British, Mexican, Italian, Greek, Japanese, Vietnamese – but then realised that this is the whole point of the restaurant! Considering this, it was perhaps very pedestrian of me to choose such a British dish for my starter, the Daily Soup of pea, mint and courgette, but my trusty companion chose a contrastingly Asian dish of Chicken Potstickers (a less elegant name for gyoza) with a soy-chilli dip.

My soup was very delicious indeed; being very much in the mood for vegetable goodness. I was very happy with the balance of flavours, although it tasted more of parsley than mint and I felt the need to season, but that’s just me being fussy. Having nibbled on one of my accomplice’s dumplings, we decided that this place could do Asian too, and the zingy dipping sauce hit the spot.

For our mains, we both accidentally went Greek – we ordered a Mezze Plate and “The Big Greek” Lamb Focaccia Burger with feta, tzatziki, salady items and skins-on chips. The two were very filling, the lamb was succulent, was reported lovely with the feta and the chips were decent. My mezze platter was a veritable feast of Greek delights, though renowned for all tasting suspiciously similar. I’d say that the baba ghanoush was a definite highlight.

We ploughed on manfully with pudding orders while drinking Moroccan Mint Tea, of which I was slightly sceptical, as I was denied the hazy memories of drinking the authentic sugary green tea and mint brew that I was once given in the Atlas mountains (boast, boast). So we drank our ordinary mint tea, albeit it in a very authentic teapot, while we anticipated sharing a Milky Bubble Double Chocolate Cheesecake and Jude’s Fresh Fruit Crush Sorbet – one scoop of bramley apple and one of blackberry. The cheesecake was luxuriously hedonistic, so I tried to pretend like I was interested in the sorbets that tasted of cooking apples whilst stealthily tucking into the more important dessert.

After scoffing our food, our kindly waiter gave us the lowdown on some Giraffe facts. Their focus is not on locally sourced, organic or head chef inspired food. I didn’t really expect that sort of thing from a chain restaurant anyway though I don’t mean to say that this turns me against them, as I know I could take any of my friends here and they would be happily catered for. I would much rather come here than ever set foot in Nando’s, and not just for the non-tedious-chicken-based menu but for the friendly service and reasonable prices too.