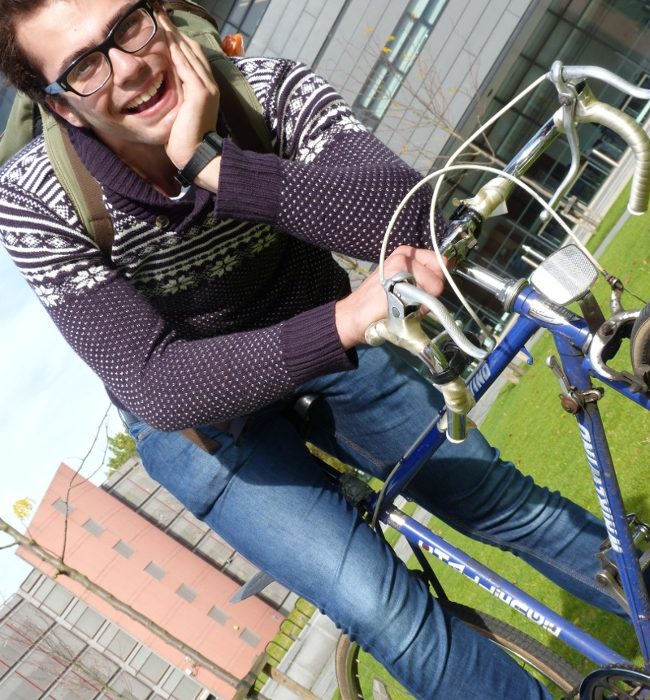 Cycling, transport for us pricks

I hereby decree that all good people of the University of Manchester, should make their way about these lands with their builder’s bums placed firmly on the seat of a bicycle.

Now, before you make a mess in your eco-friendly, thatched straw pants at the idea of an article praising all things pedalled, I in no way give a duck’s left tail feather about cycling to save Gaea. Forget the environment, there is only one reason that going en vélo is the bee’s bollocks and it’s because it is a socially accepted way of being a complete arse hole.

In many other groups of vehicle enthusiasts you will find a great deal of respect shared between them. Motorcyclists give each other the nod as they pass in the street before they go for a Sunday ride, resting their beer bellies on their horrendously unnecessary “hog”. Even car drivers will be courteous – sometimes making themselves feel like better humans by giving way to each other if at a difficult junction.

But us cyclists have none of that childish camaraderie.

We don’t bother ourselves with acknowledging each other. The feelings shared between two cyclists is bordering on hatred. Out there it’s just you and your bike, every other self-powered two wheeler on the road is either snailing along in the way or a being a nauseating show off as they peddle past.

Of course we are also tossers to everyone else as well. Nothing is more exhilarating than coming up the blindside of a magic bus and then acting outraged as they cut you off whilst pulling in to a stop.

And red lights, what a joke – completely optional. They very clearly designed to allow all cyclists past and block off other less desirable traffic. There may certainly be times when they slow you down as traffic cuts across, but you can just cut across back! Butt your front wheel out and watch those cumbersome motor vehicles screech to a halt, you won’t be able to hear the drivers cursing at you with your headphones safely in place playing Born to be wild.

It should be noted that cyclists are in no way merely bound to the road. We blend the line between tarmac and pavement as we skip across the curb. However, for some reason everyone else on the pavement seems alarmed by our presence. If it’s faster to go on the pavement then obviously it is our gear-given right to knock over a few grannies.

In rare occasions we may choose to use the designated lanes for bicycles, but almost every cheesing time there is some pedestrian galumphing along on the cycle path. You cycle up behind them hoping they move out the way and when they eventually notice you, they perform some sporadic movement only further endangering both parties. You brake. They stop. And you look at each other and both simultaneously say “sorry” (but both simultaneously think “wanker”).

All of this foolery is of course done with no lights and no helmet – just remember not to crash! And if you do get caught up beneath some wheels, it’s obvious that the less protection you have, the quicker the end will be. You can just leave your brains on the road and your death on the driver’s conscience hassle free.

Who cares if we would save money, reduce congestion or clean up pollution; if everyone else cycled, it would mean that I wouldn’t be the only one soaked in sweat and panting like chihuahua in heat as I stumble into the lecture theatre.