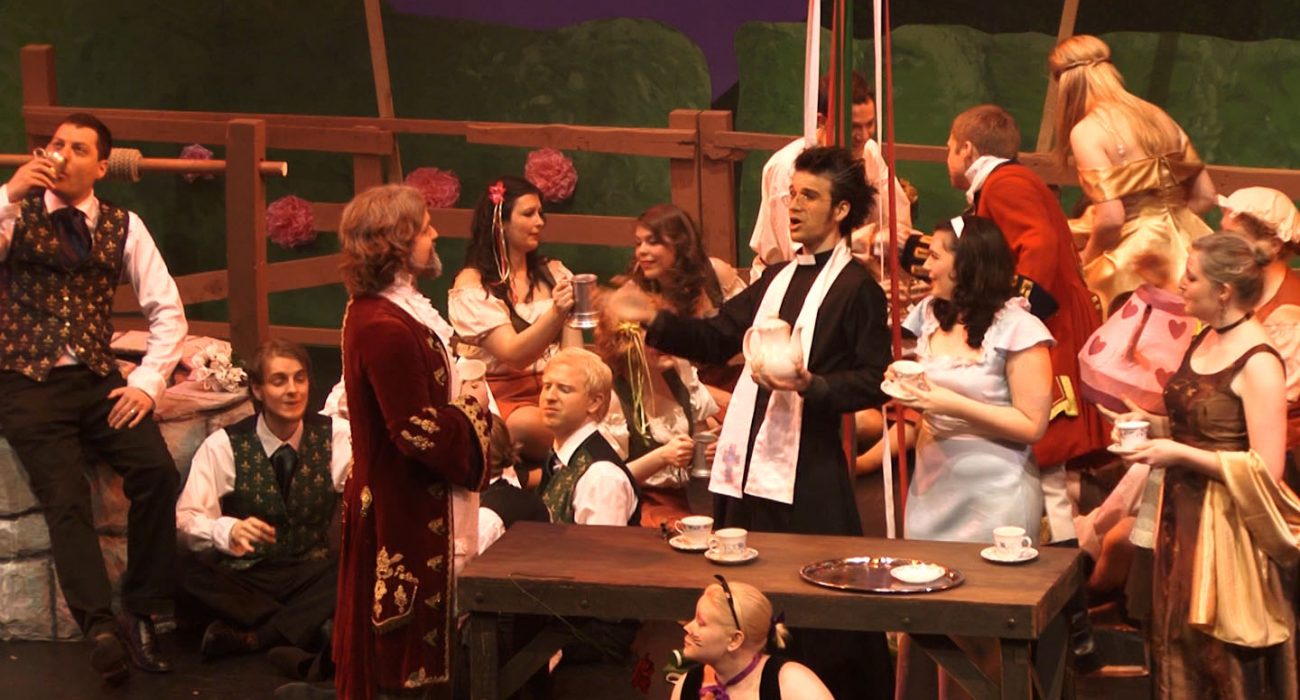 Just hanging out, like MUGSS do. Photo by Jon Hunter

Explaining what MUGSS does should be easy, they put on one of Gilbert and Sullivan’s musical comedies every year, but that’s only part of the story.  A lot goes into putting on a successful show.

To perform in a professional 600 seat Opera Theatre, they have to book it over a year in advance.  Directors and lead production roles need to be interviewed and appointed before the summer, with budgets assigned to each aspect of the show.

While other students enjoy a well-earned break, feverish preparations continue, to ensure that, come Welcome Week, they’re ready to hit the ground running in both music rehearsals and set construction sessions.  Then it all begins in earnest.  Weeks of rehearsals, sewing costumes, building set, practising with their 20 piece orchestra and of course selling tickets; over 3,000 of them (that’s almost one an hour from welcome week to the opening night!), but boy is it worth it.  Standing on stage with a cheering audience is a feeling like no other and the closest most people will ever come to being a rock star!

And it’s great experience too.  In recent years their members have gone on to be in West End musicals, work for top fashion houses, direct TV shows and even star in Dr Who!  Some of them also run two venues at the Edinburgh fringe and every year give opportunities to see and participate in the biggest arts festival in the world on a student budget.

As you’d expect from a society that has been doing this year in year out for over six decades, this is a well-oiled machine, but remarkably the personnel change every year and it’s often people who’ve been in the society for less than 6 months that pick up the mantle and begin organising the next production.

Their members aren’t just those interested in drama or studying for a singing degree either; there are no auditions for their chorus, only the main roles, and the sheer number of activities that are involved require people from all disciplines, even those with no desire to appear on stage.  Like fashion?  They need people to design and make the costumes.  Electrical engineer?  This year’s director wants an animatronic cat.  Not sure?  There’s bound to be a part of their show that can use your skills.

Nobody expects any of this to be easy. They work hard – you have to to produce a quality show – but they also know how to enjoy themselves, socialising after every Wednesday rehearsal and crew session, holding legendary house parties, a huge Christmas dance and a classy formal summer ball.

It’s not all Gilbert and Sullivan though; MUGSS also produces an annual 24-hour show. This year’s is a bite-size musical they’ve written themselves to give everyone a chance to get involved straight away, whether they’ve been on stage before on not.  Turn up on Friday night to find out what it is (The reveal of the show will be a spectacle in itself and is something not to be missed!) and work through the night to rehearse and perform it 24 hours later.  For those who prefer watching, go along on Saturday evening to see a hilarious show for the price of a pint.

If you’ve ever wanted to be in the limelight, design clothes, choreograph dance routines, manage a website, direct, write a script, be a contestant on the Apprentice, or build a 6m tall false perspective replica of the Tower of London, there’s a place in MUGSS for you, all whilst having a non-stop social life!

Who told you 19th century light opera couldn’t be fun?

Box-out or footnote to article:  See www.mugss.org/24 to get involved or be in the audience on the 7th and 8th October.