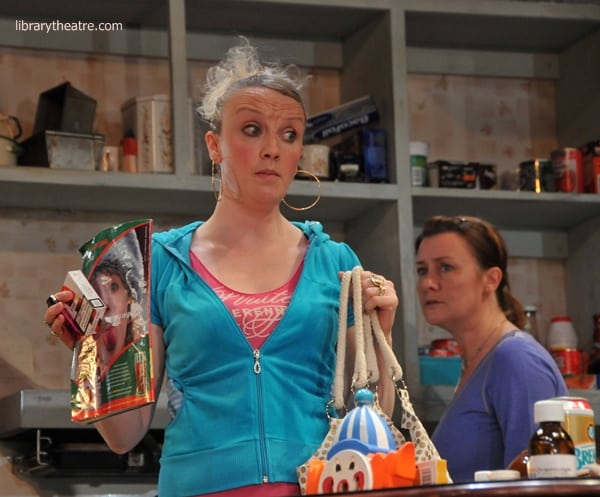 All The Way Home at The Lowry

Not going all the way

Two stars out of five

It is appropriate that this new play from Salford-born playwright Ayub Khan-Din, best known for writing East is East, is having its premiere at The Lowry, surrounded by Salford Quays and the burgeoning Media City. All the Home Way is a glimpse into the communities that have been ‘regenerated’ over the last ten years.

The unseen Frankie lies dying in his bed, his breathing supervised through a baby monitor, while his family gather in the kitchen beneath contemplating the impending death of their brother/ nephew/ cousin and the demise of the Salford community that they have grown-up in.

There is clear affection for Salford and its people but too many characters are close to caricatures. Carol (Kate Anthony) is the sibling, who has moved out of Salford and now lives in ‘Didsbury Village’, cue references to Waitrose, petty snobbery and sniggers of recognition for, its fair to guess, a overwhelmingly middle-class audience. Philip (Paul Simpson) the semi-literate younger brother who pours endless spoonfuls of sugar into his tea is an embarrassing parody. Brian (Sean Gallagher) is a London-based creative professional who reluctantly returns to Salford. The character is unrelentingly dull and so contrived and stilted that he comes across as not simply emotionally and culturally dislocated from his siblings but entirely alien to them. Janet (Susan Cookson), the dependable centre of the family and Sonia (Julie Riley), the troubled recovering drug-addict, do add some balance, their performances capture both a sense of hopelessness and resilience in the community. But overall the characters are not sufficiently engaging to justify the plays emotional climax and neither do they have the depth to give an insight into the complexities surrounding the breakdown of white working-class communities. The various characters’ illiteracy or alcoholism or casual racism is rarely explored or contextualised and is often simply used as an excuse for a one-liner.

The Salford setting is largely convincing but there are occasional superficial references that are unnecessary. Apparently Manchester United tickets are quite expensive. Who knew?

It is a credit to the Library Theatre Company and The Lowry that they are willing to stage vaguely political theatre that does attempt to explore and reflect Greater Manchester’s communities. It is a shame that All The way Home ends up having so little to say.

All The Way Home is on at The Lowry until Saturday 15th October.

Tickets are available from £11 for students.