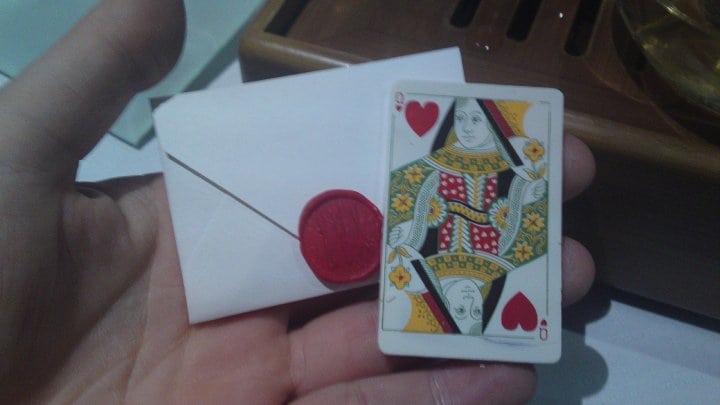 A jam tart disguised as a playing card

I’ve been to Heston’s

When I left Heston Blumenthal’s restaurant The Fat Duck, I felt a little dead inside, knowing that I had just eaten the finest meal of my life and that every future meal would be insipid in comparison. Even the adoring words in this article will be pallid to my mind that so reveres that fateful day, Sunday 4th, April 2010.

Though this meal was devoured over a year ago, I remember it clearly. I spent between five to six utopian hours with my parents and three sisters, trotting happily through no less than 16 courses (with coffee and petit fours bien sûr). Being the youngest and thus most spoilt, it was all to celebrate my achievement of managing to live to 18 years old.

The first course, more of a pallet cleanser, was a liquid nitrogen-poached Green Tea and Lime Mousse. There’s nothing like a -196 °C starter to blow your mind. As the waiters poached, they sprayed a lime perfume into the air – an aspect of Blumenthal’s food is to rouse more than once sense. I can’t describe the process of eating it, because as I placed it tentatively in my mouth (after it had been subjected to green tea powder), it disappeared and my mouth was left a palimpsest of distant flavour, recalling nothing more than a wisp of lime hallucination.

It’s evident why this restaurant has three Michelin stars: every course that followed was a gloriously honed pallet of flavours and textures, everything I ate tasted better than anything I’d eaten before.

Another course was Mock Turtle Soup (c. 1850) ‘Mad Hatter Tea’, as seen on television. We were presented with a bookmark alluding to this Alice in Wonderland tale, then given a bowl with tiny amounts of reconstituted egg (essentially a turnip mousse), enochi mushrooms, reconstituted bacon (layered ox tongue terrine), cubes of pickled turnip and cucumber, and finally black truffle. Waiters arrived with a set of gold fob watches, which were actually freeze dried concentrated stock cubes wrapped in gold leaf. We poured hot water over our own fob watch in our own teacups and stirred it to transform into a delicious stock. The stock was poured over our food I delighted in eating such a ridiculously, painstakingly drawn out dish (which, of course, tasted incredible).

We drank golden tea that left one side of your mouth hot and the other cold, we peeled distilled whisky gum bottles from the glass of framed maps, we ate toffees with the cellophane wrappers still on and Queen of Hearts playing cards that were in fact jam tarts, I could go on… One of my favourite moments was on my way back from the bathroom, when I found one haphazard sister in the wine cellar with a waiter, casually discussing something or other.

One of my greatest life ambitions is to be able to afford to eat in as many of the best worldly restaurants as I can fit in. I would love to go back to Heston’s, but I don’t mind spending the rest of my life combing through culinary spheres for restaurants that might touch upon The Fat Duck.