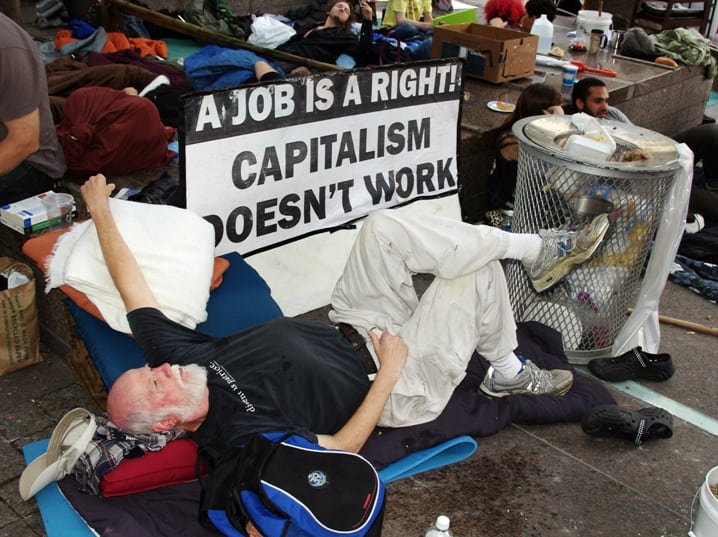 Defiant: an Occupy Wall Street protestor lets his poster do the talking

Manchester. New York. Taipei. Brisbane. Rome. Hong Kong. Buenos Aires. Just seven of the 951 cities in 82 countries where political occupations broke out in October. Though the exact aims of the occupants are fuzzy and unrefined, the reasons for social unrest are plain to even the most isolated of observers – worsening living standards in the face of a sluggish global economic recovery and increasing displeasure with current political practices that leave the “99%” feeling underrepresented or even ignored due to the prioritisation of the interests of business leaders and other elites above the concerns and problems of public.

Until now, unified global action had been a distant pipe-dream due to the range of problems unique to each country – yet it’s easy to see the general source from which the widespread international action has sprung. In the context of social and political unrest following the recession, the recent wave of occupations represent a break from traditional methods of protest. But why occupation? What does the act of bunkering down in one location represent? And why has it become the current popular means of protest?

There are obvious advantages that occupation has over other forms of action. The longer the occupation lasts, the greater the amount of coverage the occupants are likely to accrue – and given the essence of an occupation, protesters must be prepared for the long haul. This provides dissenters with an arena in which they can hold meetings and discussions which are practically impossible in the context of a boisterous march, or a heavily pre-planned static protest in which much of the discussion is already meted out between close groups. By allowing the protest to adapt organically according to the tone and volume of press attention, the protest can more effectively react to the concerns of non-protesters. Moreover, occupation engenders political debate as well as addressing logistical concerns: it is an opportunity to educate people in alternative means of association and politics, who may be new to political activism. A semi-permanent, social media-savvy, widely publicised gathering of dissenters and protestors is, therefore, bound to be a greater thorn in the side of those being targeted by the protests.

The method of occupation can, however, be a double-edged sword. Joe Heffer, Chair of International Students for Social Equality, told me that whilst his organisation encourages “mass discussions of political alternatives and social issues,” occupation alone is simply not an effective form of protest – the general lack of long-term planning, combined with the inevitable wane in enthusiasm and the threat of government intervention can often overshadow the cause of the occupation itself. What’s more, occupations can easily be hijacked by more vocal, well-established activist groups, who may attempt to divert the occupations into “safer channels”, such as trade unions and political parties.

This is not to say that the ongoing Occupy protests have been without success. Suzanna Dickson, a member of Manchester Autonomous Students and participant in the much-publicised Roscoe Occupation, explained that perhaps the protest’s biggest strength was “the great range of creative people involved, who managed to organise some great and unusual events with very little resources. You can’t just occupy somewhere without creating something from it as nobody will take you seriously.” Perhaps, then, a genuinely purposeful occupation can be a potent form of protest.

The Occupy Wall Street protests have proved that, having developed remarkably quickly in an incubation period of only a few weeks. Tens of thousands of people have gathered at the heart of New York’s financial centre to voice their disgust at what they see as the grossly unjust excesses of capitalism. Protesters say that attempts to infiltrate and steer the group towards other channels by established organisations are a major threat to their autonomy. However, there are inherent problems within the movement which are yet to be addressed. Some have argued that the bulk of the OWS protesters are promoting their own, alternative ideology – whether that takes the form of anarchism, socialism, or some other anti-capitalist paradigm. If this is the case, surely commitment to a single ideology would be deadly to the protesters’ legitimacy, particularly given that it rests upon their claim to representation of the embittered majority? If those behind Occupy have such a strategy in mind, it may be a fatal mistake. To adopt such dogmatic, ideological tactics would be to leave the movement open to a volley of criticism by those who would cherish the opportunity to marginalise their growing cries of dissent.