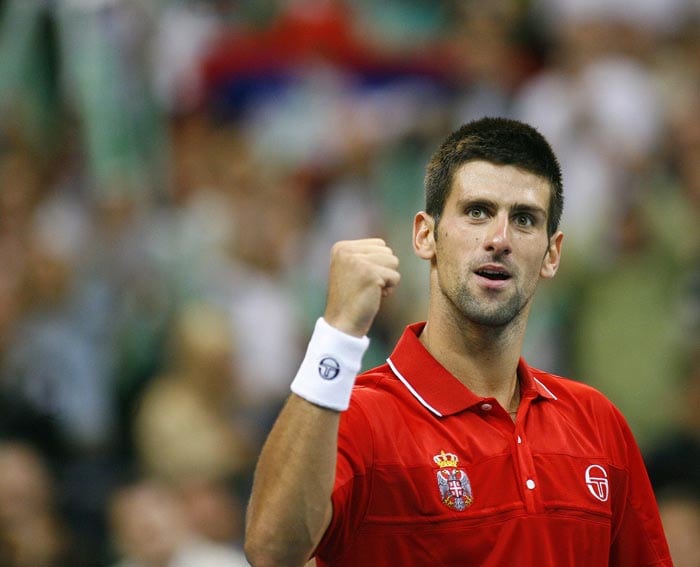 Djokovic – On course for greatness.

In September of last year Novak Djokovic, humbled after defeat in a pulsating US Open final with Rafael Nadal, joined a unanimous chorus of praise for his opponent. “He has the capabilities to already become the best ever player”, Djokovic declared. “He has proven to the world that he’s the best in this moment”.

Fast forward a year however, and it is Djokovic who is looking invincible. A somewhat bewildered Nadal, after another blistering US Open final in September that lasted more than four hours, conceded that “[Djokovic’s] level is fantastic… he’s doing very well, mentally, everything. So just accept that. Accept the challenge and work. He’s confident in every moment to keep believing”.

Djokovic’s records this year make humble reading for any tennis player, let alone the likes of modern great Nadal. He has won ten titles, including three out of the four grand slams; his loss in the semi final of the French open to Roger Federer one of his only two defeats. The other defeat, to Andy Murray in the Rogers Cup final, was the result of a forced retirement due to a shoulder injury. The magnitude of Djokovic’s incredible year is emphasised when looking at his win ratio. At an astounding 96.97%, he has surpassed both Roger Federer’s golden years in 2005 and 2006, and John McEnroe’s previous record of 96.47% in 1984. Djokovic also surpassed McEnroe’s record of 39 straight victories with a stunning 43 game streak.

Djokovic has reaped plaudits from all corners. McEnroe saw the warning signs himself in May this year, as Djokovic stampeded towards his unbeaten record. “It certainly brings back memories of 84. I’m quite excited that he might break my record at the French Open. To put it mildly, it’s been amazing to see what he’s done and how much more confidently he’s playing”. Given McEnroe’s fiery temperament on the court, it is perhaps surprising how positive he has been about Djokovic’s achievements. “Djokovic is having the greatest year in the history of our sport”, he said in September, “[In tennis today] there is more competition, more athleticism, deeper fields and more depth in the sport. So his record is even more impressive than mine”. Pete Sampras was equally as impressed by Djokvic’s record this year, calling it “one of the best achievements in all of sports”.

As impressive as Djokivic’s year has been so far, though, there is still tennis to be played and McEnroe may be able to cling onto his record. Djokovic has played 66 games of tennis this year – in 1984, McEnroe played 85. Whilst a back injury has curtailed Djokovic’s progress somewhat, he should return for the Paris Masters and the World Tour Finals in November. After a golden year it is abundantly clear that Djokovic is more than capable of maintaining his incredible form.