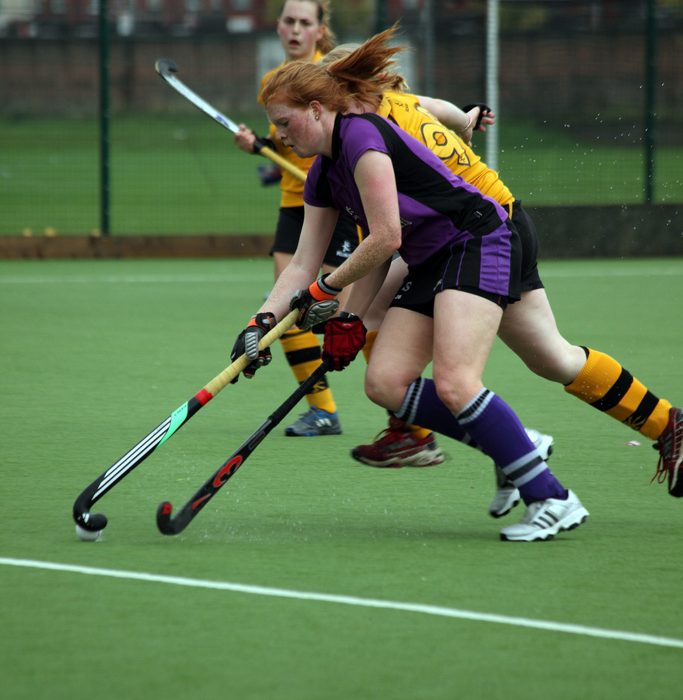 The newly relegated Manchester Women’s Hockey 1st XI looked set to build upon their recent away win at Liverpool with a victory against a Sheffield side still celebrating their promotion to the Northern Conference 1A. The 2nd XI meanwhile, began their campaign aiming to replicate last season, a year which saw them win the All Divisions Cup and finish 4th in the league.

The first team were up first and started well, taking inspiration from a break in the persistent drizzle with Davis coming close early on. New player Fatch soon gave the home side the lead, firing an awe-inspiring shot into the top right of the net. This goal was to set the trend for the rest of the match, in the next fifteen minutes Sheffield barely left their own half. When they did manage to escape and take the ball off Manchester’s fiery strikers there was never a way through a solid defence. The four purple shirts were like a brick wall in the face of the Sheffield attack, neutralising any threat.

The visitors conceded an ever-increasing number of fouls as they wilted under the pressure of the Manchester assault. A straggling foot led to the first short corner of the match. Manchester approached with practiced ease and one more would have been added to the tally if it were not for some great defensive work from Sheffield, who found determination in the harsh, and unrepeatable, words of their keeper. However, no amount of foul language could prevent the inevitable, and another powerful ball in by Watton found its way through a D brimming with yellow shirts to Lucy Walker’s feet just beside the net. All that was left for Walker to do was to slip it past the keeper’s pads and double the score.

This second goal appeared to wake Sheffield up and the match became significantly less one sided, with some sterling running being done by the Sheffield front two. Stevenson cast a solitary figure in the Manchester goal though, as the Manchester defence held firm and kept play away from the home D for the remainder of the half.

The second half opened with a magnificent Manchester attack led by Fatch and McMullan that was disappointingly brought to end by another great save from the Sheffield keeper. The Manchester girls did not have to wait long for another goal though, as a great pass to Crosley allowed her the space to hammer a shot home from the edge of the D. Errors became more frequent for Sheffield as the pressure began to show. A free hit in a good position was squandered and a hefty foul on Timms led to the only card of the game.

As the game entered its final minutes the weary Sheffield side managed to scramble together a final assault upon the Manchester defence only to be let down by a sloppy pass from the recently penalised forward, the break down leading to a short corner for some shoddy tackling. Crosley was the happy recipient of a fast ball and slammed it in to secure Manchester’s first home victory of the new season.

A surprisingly positive Sheffield captain said “We are happy with the first friendly of the season and look forward to coming to Manchester again”, while Manchester’s Hannah Cobbold described the match as “a positive first performance with lots of aspects of our game to work on.”

The second team’s task was much the same as their peers, taking on opposition a couple of leagues below them. Six new players created a side full of energy and it was one of these new players that opened the scoring, Irish bullet Weir having a speculative effort that caught the keeper unaware and snuck into the left of the net. Smith was gifted a flick but prevented from scoring by a great save. However, they did not have to wait long as Halliday scored from the edge of the six-yard box, a goal that Toria Canning swiftly added to with a powerful shot from the edge of the D that slammed into the wood.

Sheffield had a few efforts but for the most part their strikers remained lonely at the front as Manchester put their bodies on the line, quite literally for Evie Lant who took a ball to the face, keeping Manchester in the ascendancy. The consistent possession allowed Canning to score another by slipping it past the keeper and the talented player swiftly followed this up with two great efforts, one reverse sweep and one powerful shot, to take Manchester 4-0 up. The game was wrapped up when Sheffield conceded a final flick which skipper Canning put away. The Sheffield captain admitted it had been a “tough game” but said Manchester were “strong opponents”, four goal hero Canning only had two words which perhaps epitomized the day’s performances – “smashed it”.