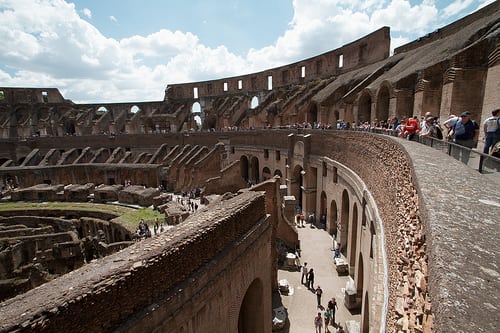 A Roman holiday (on the cheap)

Being students nipping off to Rome for a long weekend sounds ridiculously decadent and unjustifiably pricey but I am here to say think again. With Ryanair offering unbelievable rates these days it can be cheaper to fly to Rome than take the train from Manchester to London! And it’s not just on travel that you can save.

The idea of renting a flat in Rome sounds ludicrously expensive too but again this is a misconception. For four nights we rented a tiny but sweet flat called ‘easy-roma’ in the really accessible area of Ponte Lungo (on the edge of the centre of Rome) for under a hundred Euros each. Having the flat meant we saved on eating out, as we had our own space to relax in after a hectic days sightseeing and attempt some Italian style cooking of our own.

Rome is a cultural dream and you would think that it would be costly to see some of the greatest paintings and architecture in the world, however so many of the wonderful churches and sights are free.

Il Gesu church, the Jesuit masterpiece in the Campo de’Fiori area, is particularly worth a visit. The ceiling is baroque at its best; a mixture of stucco, painting and statue melt into one creating a world of optical trickery and movement in the heavens. Note the aggression of the angel statue on the right hand side of the ceiling, who is literally booting the painted Protestants out of heaven! Another great church to go see for free is Santa Maria in Trastevere which hosts shimmering 13th century mosaics. Just remember that churches shut over lunch and what a very long lunch the Italians take, so do not go between 12-4; this is a fact we frustratingly forgot a number of times.

Personally I didn’t feel the need to go into the big tourist sights like the Colosseum or the Roman Forum and Palatine, which both have entrance fees, when you can see them in all their magnificence just walking around Rome; they are pretty hard to miss. As a massive history buff seeing the Colosseum for the first time was pretty breathtaking. Unintentionally we managed to wander past it just as the sun was setting and swarms of starlings were silhouetted dramatically against the mighty structure. It really was a moment straight out of Gladiator and I may have quoted “My name is Maximus Decimus Meridius” just the once!

All the little piazzas of Rome become a hub of activity after sundown and bars serving aperitivo make eating and drinking at night that bit more cost effective for the traveller on a budget. For those of you that are not aquinted with the term aperitivo, it is a pre-dinner drink and in Rome an aperitivo is always accompanied by finger foods or small hors d’oeurves. However the accompanying food is not always small, indeed there are a number of places where you get a full meal with your drink. The bar Aristocampo in Campo de’Fiori for example, has a huge buffet spread and it isn’t school meal style buffet food on offer but simple and delicious Italian cooking.

Of course I am not implying you will spend nothing, not with all the coffee to be drunk and the pasta to be eaten, but what I am saying is that going to Rome isn’t as extortionate as you may assume and if you had before discarded Rome on the basis of price, think again.