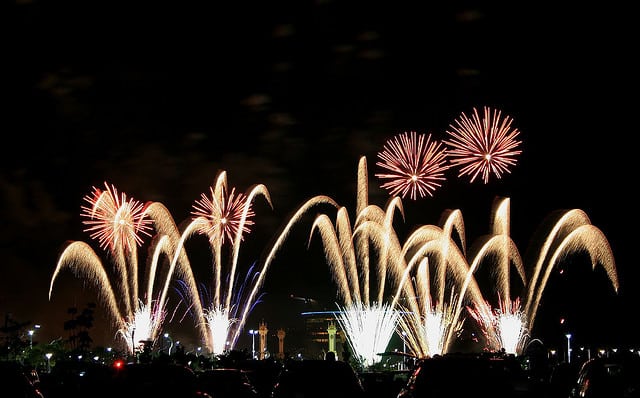 Time to end this firework farce

In the days of Face Time, 3D TV and other such intense visual technologies, the practise of fireworks and bonfire night just seem increasingly pathetic. Other than the feeling of a communal embracing of winter; wrapping up in the scarf and bobble hat and congregating on the local village green or field, there really is nothing to ‘Guy Fawkes Night’ any more.

The history seems almost redundant today. Yes, the story of Guy Fawkes is exciting and holds some esteem in the important past of sectarian conflict in this country, but it has more or less been confined to the bracket of mythology through its recent, more commercial perception. Guy Fawkes has proudly infiltrated his way into the realm of historical inaccuracy and speculation. If we are going to teach kids about a terrorist plot, surely we might as well make it relevant to current affairs rather than the events four centuries ago.

Why teach burning Guy Fawkes on a bonfire when you can teach them to co-operate and understand the crucial dimensions of a peaceful cosmopolitan British society?

As for practises of November 5th itself (and the increasing number of days either side), fireworks are becoming far more trouble than they are worth. I am by no means a ‘November Scrooge’, but people must surely not be blind to the trouble fireworks have caused.

The horrific M5 crash was supposedly strongly affected by smoke firework display at a nearby rugby club. Nobody can warrant a desire for fireworks in the face of such tragedy. On top of this many have again been injured nationwide including 170, 22 hospitalised, in Lewes, Kent. Though these nights may be ‘incredibly popular’, it’s not like we are short of reasons to celebrate in modern life.

It just seems like the tag of ‘any excuse’, which is often attached to students, is one which can be attached to the vast and anonymous ‘middle-class’ in the case of November 5th.

Britain too blows it’s frequently used trumpet over the idea of being an animal loving nation. But bonfire night would seem a plot in itself to undermine this boast. For a period of at least ten days (some say even continually until New Year), intensifying around 5th November, farmyard animals are tormented and household pets are left cowering in corners from a series of loud and unexplainable bangs.

Unexplainable. Even between two species that speak human. Can you explain why you watch fireworks? ‘They are pretty.’ But are they? Once you have seen one, you have you not seen them all? If an alien came down to earth, saw the immense technological innovations made, and then saw one of our firework displays, we would have one bemused and probably fairly amused alien on our hands.

What relevance does November 5th actually hold anymore? It’s not tied into religious belief, nor has it truly ingrained itself within British culture. It just seems like an excuse to gather and gaze, challenge the incoming winter and the night that draws in, whilst dusting away the Halloween cobwebs. But surely this cannot be done in another manner? Do people genuinely go out just to a field just for the fireworks, with Guy Fawkes in mind? Maybe the warmth of the bonfire is necessary nectar, but fireworks as a feature just become more and more of a trying and troublesome anti-climax.

If it is communal gatherings that people subconsciously crave, surely Armistice Day could more a modern poignancy for gathering, and perhaps lighting a bonfire into which people can gaze and think of those who have died or been injured in wars across the world?

Ironically, as it stands, it may in fact say a lot about the lack of cohesion in Britain’s communities that we currently rely on an aging and irrelevant ‘festival’ to bring us all together.