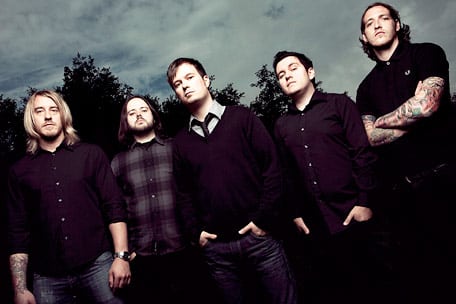 Live: Funeral for a Friend @ Academy 1

This year, Welsh post-hardcore outfit Funeral for a Friend celebrated their ten year anniversary and the band doesn’t seem to be coming to a halt any time soon.

The Bunny The Bear, and Brisbane metallers, The Amity Affliction, kick off the night with a good set which make them names certainly to look out for in the future. Las Vegas rockers Escape the Fate are the main support act tonight. The setlist is good mix of classic and new such as ‘The Flood’ and ’10 Miles Wide’ which gets some of the crowd moving yet some still appear uninterested. While everything of their performance is tight, their music just seems out of a place at a Funeral for a Friend gig.

Funeral for a Friend’s setlist tonight caters towards new and old fans by successfully mixing the back catalogue of four old albums and their new release, Welcome Home Armageddon. Throughout the night, frontman Matt Davies-Kreye seems to suffer from severe vocal problems and by the end of the night his vocal duties have been kept up by his bandmates. Fan favourites ‘Juneau’ and ‘Roses for the Dead’ do not seem to suffer from the vocal dilemma but softer song ‘History’ seems to be lacking Davies-Kreye’s usual vocals.
The newer material seems to go down well with the crowd as its style of heavy riffs and drumming is reminiscent of 2003’s Casually Dressed & Deep in Conversation or 2005’s Hours which are considered to be their best albums.

The only thing that was a problem tonight, unfortunately it was a big one, was the vocal problems and with it being a recurring problem since Funeral’s last gig in Manchester, while FFAF remain popular, the question is can their voices hold up to the strain.