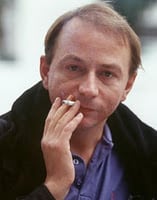 Review: Michel Houellebecq – The Map and the Territory.

That Michel Houellebecq is both France’s most controversial novelist and it’s most exportable is probably no coincidence. Atomised, his 2001 novel, alerted the world to his writing and could easily have been titled ‘No consensual sex please, we’re French and clones’.

It’s not that the book was merely repugnant in the borin’ old guts, pestilence & death department. It wasn’t even that his tale of depression and biology was inherently amoral; it barely raised issues beyond ‘Geneticists, you so crazy!’. It was that you felt a little too close to the author. You felt that his cautionary tale was actually only loosely dressed up as such; really it was a kind of hypothetical manifesto. You finished it feeling deeply uneasy about running into Michel Houellebecq on your way home.

A warning then: Houellebecq gets even closer in his latest work. The Prix Goncourt-winning The Map and the Territory is afflicted by that wacky post-modernist device used only by twats: Houellebecq has inserted himself as a fictional character. Called Michel Houellebecq. And within pages he prefixes the name with ‘the great writer,’. He’s allowed to make this self-aggrandizing claim because it’s not really Michel Houellebecq, It’s just a character called Michel Houellebecq that writes books with identical titles to the ones that the real Michel Houellebecq writes, get it? No? Well, sux 2 b u sunshine, because this is the insaaaane world of literature we live in now, and you better be ready for it.

After a while, the books begins to seem like nothing more than an excuse for the author to type his own name, or casually remind the reader of his, Michel Houellebecq’s, existence. Could it be Houllebecq would rather the spotlight be trained on him than his work? Read this review again and decide.