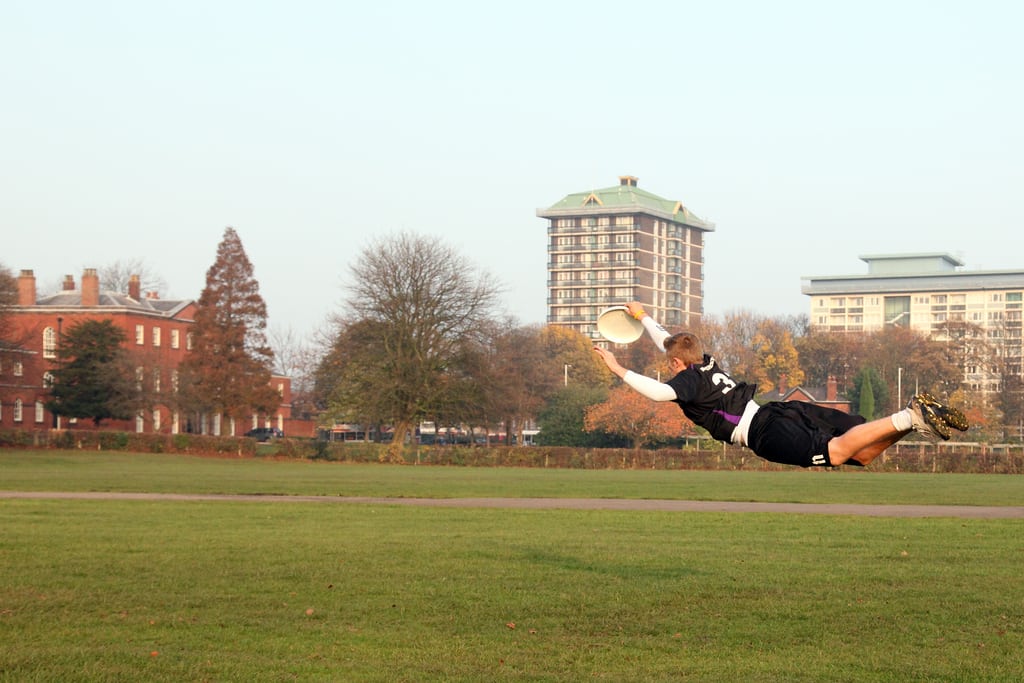 The University of Manchester’s Ultimate Frisbee club, known as Halcyon , has recently continued its dominance of the North by defending two of its regional titles over the space of two weekends. For those unaware, Ultimate Frisbee is a sport in which two teams compete to score points by catching the disc in an endzone, much like American Football. Players are not allowed to run with the disc and if a pass hits the floor, the opposing team gets possession.

The University season begins with a number of warm-up and Beginners tournaments, but Northern University Indoor Regionals in both the open and mixed divisions are the first truly competitive tournaments of the year.

In the Open division (so-called as it is open to both genders), Halcyon travelled to the Wirral to take on their Northern rivals. They started the tournament with convincing victories against both Hull and Lancaster, the two sternest tests of Saturday’s group stage. Winning their group without too much stress, Halcyon were then drawn against a much-improved Sheffield in the semi-final. A tense, closely-fought game ensued and in the end it could only be decided in sudden death. With the pressure on, both sides had opportunities to score the winner, but it was Manchester who had the composure to do so.

Halcyon then faced Leeds in a repeat of the 2010 final. The Manchester team improved considerably upon their semi-final performance, with their offense in particular looking much more effective. After trading a few points, it was Manchester’s defensive pressure that finally made the breakthrough. Halcyon went on to win the game 8-4 and confirm qualification for BUCS Nationals in late November. This was the third consecutive year that Manchester had triumphed in this competition and, having been placed in the top 3 at the last two National tournaments, they will be hoping to keep up the good results this year. BUCS Open Indoor Nationals takes place at the Alan Higgins Centre in Coventry on the weekend of the 26th and 27th November.

In the Mixed division (so-called as teams are required to have a specific mix of male and female players), for the second consecutive weekend, Halcyon travelled to Merseyside to defend their title. After two straight-forward victories, it was the home side, Liverpool, who posed the first real threat of the tournament. They showed dogged determination, but it was Manchester who held strong to win the group and qualify for a semi-final against Lancaster. Halcyon started the semi-final in great form, taking an early lead. Lancaster, however, brought out an effective zonal marking defence and slowly worked their way back to within touching distance. The fight-back was just too late though. As the full time hooter went, it was Manchester who led 7-5 and progressed to the final.

The final was, yet again, a repeat of last year’s tournament. Newcastle were the opponents this time and although they were well drilled their squad was short in number. Manchester took advantage of this fact and proceeded to run them into the ground. Thanks in particular to some great defence from the female half of the squad, Manchester prevailed yet again, with 9-7 the final result. This too was the third consecutive year that Halcyon had won this regional tournament. Last year, however, saw them finish a disappointing 9th place at Nationals. They will certainly be looking to better that result this time around. University Mixed Indoor Nationals takes place at the Aldersley Leisure Village in Wolverhampton on the weekend of the 3rd and 4th December.

While the focus moves to National tournaments in Open and Mixed, Manchester will have to wait until the new year to see whether it can complete the treble by also winning the regional tournament in the Women’s division (so-called as it is exclusively for Women!). Regardless of the outcome, winning both Mixed and Open Regionals for three years running is a huge achievement.