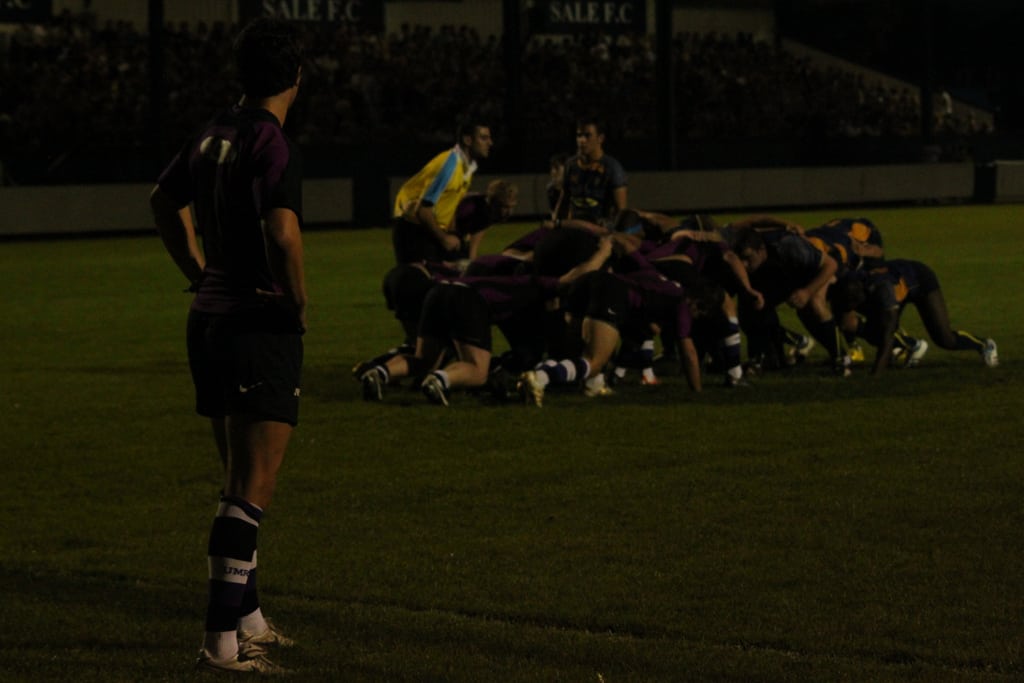 A tense atmosphere was palpable at the Armitage gymnasium for the evening clash in the unofficial varsity match between Manchester and Manchester Met. Both teams had everything to play for after indifferent starts to the season have left them fighting it out at the bottom of the BUCS 1A Northern Division. Tom Smith the vice president of the Manchester team sadly had to sit this game out however he encouraged a large crowd to come down and cheer on their sides and made sure the supporters were chanting from the off.
The first quarter saw Man Met take an early lead, encouraged on by their extremely vocal coach. Manchester levelled things up not long after though and created an established lead with excellent 3-pointers from Ibrahim and Onifade. Joe Levy Adams began to control the game from the back of the court for the home team and linked up well when in offence. Man Met had chances to level things up but were sloppy in front of the net and missed two free throws in a row. Adam Sims soon made Man Met pay for their mistakes with two fantastic long-range shots in the space of a minute. Man Met were making numerous unforced errors and were thankful when the hooter was sounded for the end of the first quarter, which saw them trailing 17-9.
A jubilant party atmosphere was developing as more and more people began to fill the balconies above the gym bringing numerous burgers, songs and fancy dress outfits with them. Man Met were really getting into the spirit of things and clearly wanted a better second quarter, however their fans were were quietened immediately with a stunning 3 pointer from Captain Jamie Hagan. Man Met began to take encouragement from their noisy band of followers however and were soon catching up with a quick succession of 2-point goals, which led to a time out being called by Manchester. Coach Tamas Okros led a lively team talk and his passionate words had immediate effect on his players who quickly passed it up the pitch to set up Beaumont for a delicate 3-pointer way outside the D. Man Met continued to dominate however and with only a minute or so left of the quarter found themselves 30-28 down which led to a crisis timeout being called once again by coach Okros for another lively exchange with his players. This technique once again did the trick as Manchester ended the second quarter with a 32-29 lead.
The crowd continued to grow and grow with chants of “D-fence, D-fence” reverberating round the court. Adam Sims (4) scored an excellent 3-pointer for Manchester early on and they began to look comfortable on the court keeping possession well however Man Met battled their way back into the game and the match began to become a lot more physical and aggressive. Man Met utilised their number 5 who was having an excellent game and he sunk several 2-pointers with ease. The travelling supporters were now in full voice and were delighted to see them end the quarter level on 45- 45.
An unnatural hush ran through the Manchester supporters, with such a nail biting finish to the game and the players cut a similarly dejected look, with heads lowered and angry words from coach Okros ringing in their ears. However they did not need fear not as Lars Sandved- Smith, Heshan El- Shiny and Joe Levy- Adams stepped up to the plate and put in their best quarters of the season. Lars sunk two excellent 2-pointers earlier on to calm the nerves and both Hisham and Adams stayed cool in front of the basket when taking free-throws. The final whistle saw a fantastic 70-62 win for Manchester, with ecstatic celebrations shown from players who truly deserved their excellent victory. Captain Jamie Hagan was wowed with his team’s performance, “I’m so happy with our all round performance and the lads deserved the victory today, congratulations to them!”
So a fantastic 70-62 victory for the Manchester Men 1st team, hopefully they can gain confidence from their brilliant performance and move up the table. Tough games lie ahead as both Sheffield Hallam 1st and Newcastle 1st are in their league but if they put in performances like this one every week then they will be tough to beat. An amazing atmosphere really helped the game and I would recommend anyone who is a sports fan to get down to the next home game as a fantastic level of basketball was played with the men showing brilliant team spirit.