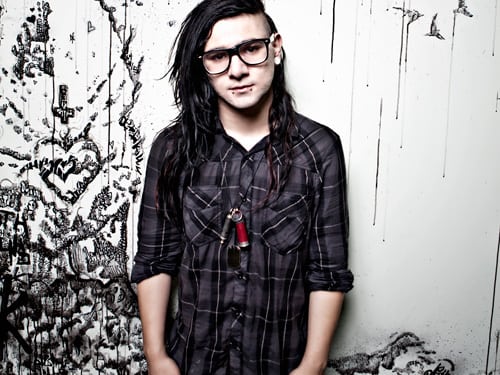 Sonny Moore, aka Skrillex, has had a wide range of publicity this year. He was, at one point, named by a collect few, as the ‘most hated man in dubstep’ but more recently was nominated for the BBC Sound of 2011 award and his first European tour has been extremely popular with every date selling out.

While Feed Me, the direct support to Skrillex, performed a good setlist, much of tonight’s crowd are still stood at the bar, killing time before Moore graces the stage. The Hertfordshire DJ doesn’t let it bother him though by performing stage dives, generating a little more interest.

As Skrillex’s infamous Macbook is lit up and the lights go down, he opens the set with a remix of Avicii’s ‘Levels’. Stood up there, he resembles a child that’s had a sugar rush and who is bouncing off the walls. The crowd go just crazy. Two extreme highlights of his setlist made up predominantly of remixes are Benny Benassi’s ‘Cinema’ and La Roux’s ‘In for the Kill’.

While the setlist is mainly made up of remixes, a few of Skrillex’s own songs are thrown in, including ‘Scary Monsters and Nice Sprites’ and ‘My Name is Skrillex’. ‘Rock n Roll (Will Take You to the Mountain)’ proves that he is not just a glorified remixer and the lights are absolutely amazing, along with the accompanying video played throughout the song.

Everything about tonight is simply amazing from the setlist to the light show. While people will continue to hate on Skrillex, likely for the rest of his career, it is unjustified. So what if he is the most hated man in dubstep? After tonight there are over 1800 people who’d disagree with you in Manchester alone.