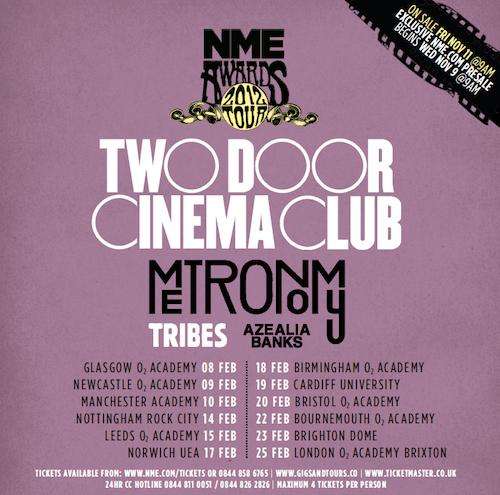 One thing was missing from the annual NME Awards Tour at Academy 1 on February 11th – alcohol. The crowd, packed full of 15 year olds who listened to Two Door Cinema Club’s Tourist History during their first house party last year, at least made for seeing the stage amidst the sea of pre-pubescent males easy. In distress, I chugged my Jack and Coke while the out-of-her-element Harlem rapper, Azealia Banks sang, “What’s your dick like, homie?” straight into the face of the 14 year old boy who’d gotten there early for the front row of Two Door.

Tribes, who should have gone first, were forgettable, the one exception being when lead singer Johnny Lloyd did the obvious by jumping into the crowd singing “Oh no stranger, you’re just like me.”
Not surprisingly, the chorus of “The Look” was the only thing two-thirds of the crowd knew about Metronomy. Since their latest album, The English Riviera, made its huge impact on the electro-pop scene, they were the main band I’d come to see. They were quirky and chill, but unfortunately, lost on the crowd.
Two Door Cinema Club finally took to the stage and soothed the worries of the kids who were anxious about making curfew. The band’s set was average as they are better suited for festivals and have over-toured their own songs. Their best energy came from the sneak peek of their new track ‘Handshake’ as they are long overdue for a new album.

While the NME Tour did indeed bring some of the best music from the past year (because that is by definition what the tour is about), it also brought with it an awkward crowd. Personally, what it brought me was a Metronomy t-shirt and an intense desire to hit up the off-license afterward.