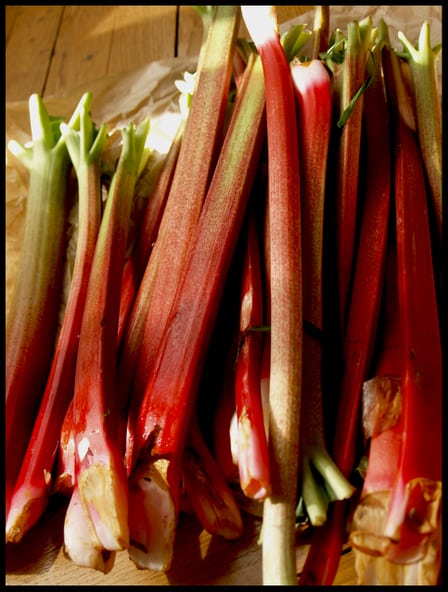 I’m deeply ashamed to say that I have never cooked rhubarb. In my childhood I equated rhubarb with gooseberries, which were unacceptable to my young palate. Now that I openly embrace many more hitherto suspicious foods, I can see that rhubarb is not only satisfactory, but is glorious and gratifying.

Before the Second World War, there were over 200 rhubarb growers in Britain, predominantly in Yorkshire. When in season, hundreds of tons of the pink stalks were shipped on an express train from Leeds to London, then out into Europe. After the war, when more exotic fruits became available, rhubarb became unpopular and unfashionable.

However, in recent years rhubarb has experienced a popularity surge in British restaurants and homes. Outdoor-grown rhubarb is slightly different to forced rhubarb which is sweeter and more tender. In 2010, Yorkshire forced rhubarb was given Protected Designation of Origin status, adding to the list of foods and drinks that have their names legally protected by the European Commission’s Protected Food Name scheme.

Rhubarb is quite bitter when unsweetened and thus is often poached, baked or stewed with quite a lot of sugar. It can be used as a compote with savoury foods such as mackerel or pork, but here I have a homely recipe for a rhubarb crumble that is sure to be a tribute to the historic vegetable. Be careful not to use the leaves, they’re poisonous.

Ingredients for the topping

Preheat the oven to 180°C/350°F. Rub the butter into the flour in a large mixing bowl. When the mixture looks crumbly and even, add the sugar and oats and mix. Set aside and make the filling.

Ingredients for the filling

Chop rhubarb into chunks, stew in saucepan over a gentle heat with the sugar and ginger, for 15 minutes. Drain off half the juice when cooked. Place in a pie dish, sprinkle over the crumble topping and bake for 30-40 minutes.