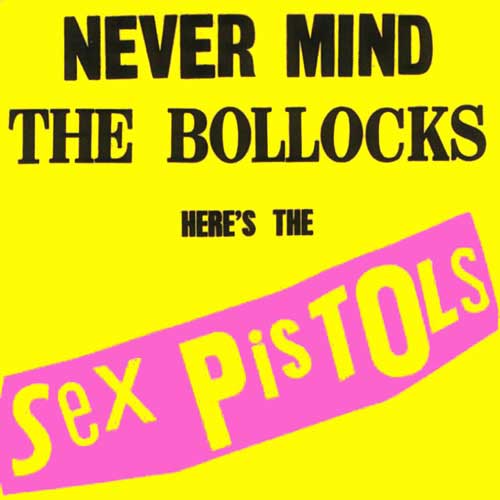 Thirty five years ago this year, with one specific track ‘God Save the Queen’ to coincide with the Queen’s silver jubilee, The Sex Pistols’ only album was released. It may have only been their debut but the generation it spoke for showed why it was an instant classic and helped boost the careers of John “Johnny Rotten” Lydon and the late Sid Vicious.

The album’s vile, fluorescent yellow and pink sleeve made it instantly recognisable amongst any record collection and the controversy surrounding the release of an album with “bollocks” in the title helped increase the advertising and popularity of this vinyl.

The most controversial track on the album is ‘God Save the Queen’ and is probably the most well-known Sex Pistols track. The song claims that the Queen has a “fascist regime” and that England has “no future”. Even though it reached number 1 in the charts, the BBC refused to give the number 1 spot to the Sex Pistols, instead giving it to Rod Stewart’s ‘I Don’t Want to Talk About It’, generating even more publicity and controversy.

Three other infamous tracks from Never Mind The Bollocks… include album opener ‘Holidays in the Sun’, ‘Pretty Vacant’ and ‘Anarchy in the U.K’ with the latter being the only single released before EMI famously dropped the group, with the lyrical content reflecting the issues of the time that extremely concerned the youth.

Never Mind the Bollocks… is widely recognised by critics as one of, if not,  the most influential punk album of all time which has been used as an inspiration for many that followed, including bands like Nirvana. There have been numerous reunions of the Sex Pistols, possibly hypocritical of what they originally wrote about, but the album will always remain a classic as it spoke for an entire generation.