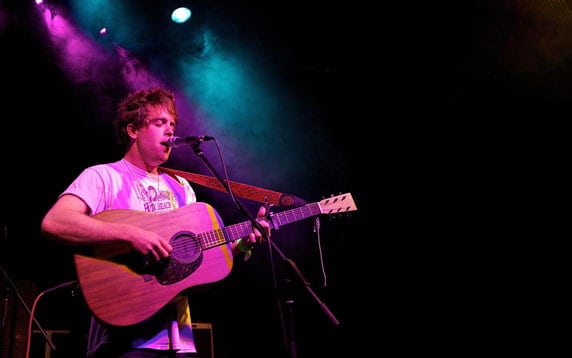 It was a busy night in The Academy as I breathed in to allow for an army of cap (complete with sticker) clad people past on their way for the MOBO tour. I, however, had a more serene task at hand, ignoring the pounding grime from above to enter the lulled setting of Academy 2.

Opening was Salford’s own Ren Harvieu who carefully made her way on stage aided by the use of a crutch having recently recovered from a near-paralysing injury. Despite the frail appearance, her smoky voice resounded strongly with a depth that matched her heavily pencilled eyes. A simple ensemble helped shine a musical spotlight on Harvieu, who in turn drew the attention of the audience, with tracks like ‘Crying’ and the Carole King-esque ‘Through The Night’ particularly standing out.

For the evening’s main billing, Leftwich had assembled himself an identikit band of sensitive types, all of whom sported Lego man hair do’s and an expression somewhere between sex face and intense bowel discomfort, conjuring up a kind of squinty eyed grimace that one would normally associate with serial masturbators.

Aesthetics aside though, the gig failed to hit second gear. The crowd was restless with chatter throughout and the songs lacked the momentum or variation to keep even those most diligent purveyors of mediocrity, Athlete, entertained for a night. By the end of the set, I was ready to go and bang on ‘Wires’ accompanied by a Pinot Grigio blush just to edge things up a bit.

As good as Leftwich may sound when his hushed tones are sound tracking your M&S meal for two, a live performer he is not. Lacking in presence and without a uniquely individual voice, he was easily upstaged by the powerful vocals of Ren Harvieu who looks set for big things.