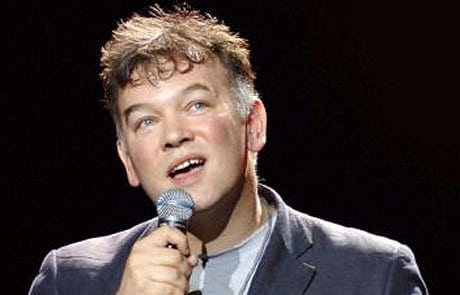 One thing must be made very clear from the outset here. Stewart Lee is, how do I put this, not exactly a fan of the Internet.

He finds it difficult to discuss twitter without choking on his own scorn. To him the micro blogging site is “a government surveillance operation run by gullible volunteers, a Stasi for the Angry Birds generation”.

The veteran comedian, composer of Jerry Springer: The Opera, and sometime newspaper columnist specialises in a brand of snarling comedy that like a famous brand of yeast spread, you either like or you don’t.

And so tonight, to a theatre packed with men and women brave enough to withstand the gale force winds battering the city, he raged away. Following the success of his TV series ‘Comedy Vehicle’ he hit the road with his whimsically named show Carpet Remnant World.  Weaving a series of subtle vignettes infused with a mock self-pity, he projected himself very much as a man at the end of his tether, not quite angry at the world, just disappointed.

For one thing he’s disappointed that his wife no longer sees him as a sexual being, (“She once asked me if I was having an affair after if I came home with a new pair of pants… recently she saw another new pair and asked me if I’d shit myself”).

His trademark style of telling jokes and then ruthlessly deconstructing them, explaining them to the audience was very much on show tonight. While entertaining, it was employed a little too often, losing him momentum and making the show resemble a lecture more than a comedy show. Added to this was an annoying habit of simply pausing and acting angry at the audience. Although this was occasionally frustrating, it didn’t seem to bother the punters all that much.

Fans relished his attacks on eternal nemesis Michael McIntyre and lapped up the pathos of his final routine, detailing his search for a utopia made from the eponymous carpet remnants.

All in all a solid set, with moments of the daring and poignant comedy that he excels in- but this wasn’t his best show. Not that that should irk him too much. After all, he once boldly named one of his performances ‘41st Best Stand Up Ever. Bless.