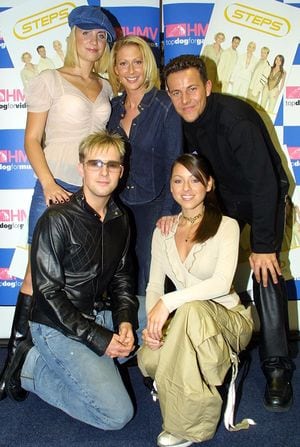 Let the nostalgia flood back.

It’s been over ten years since Steps, arguably one of the most iconic British groups in recent memory, first split, breaking hearts not just across the nation, but across the world. It should come as no surprise, then, that tickets for their STEPS: On the Road Again tour sold out within days of going on sale – indeed, tickets for their shows at the MEN Arena this April were going for upwards of £70. It would have been a price worth paying.

There can be no denying that the levels of excitement, anticipation and (perhaps) fear inside the MEN were at a high, as an extraordinarily broad demographic eagerly awaited the appearance of these giants of pop music. They were greeted, instead, by supporting act Shockolady (murmurs of “she’s just a shit Rihanna” rippled through the arena), whose groundbreaking lyrics – “I like it like that, do you like it like that? All the boys in the club say ‘we like it like that’” (repeat thrice) – made me quite glad I’d turned down the opportunity of an interview with her.

Following Shockolady’s timely departure, there came a period of nervous waiting for the myth that is Steps to appear onstage. There were literally hundreds of questions on the audience’s lips: “Would Faye still be attractive?”, “Has Claire put on weight?”, “Is Lee still a nice man?”, “Why are we here?” Before long, they would be answered. The house lights went down, the speakers began to rumble and the people wept: it was time.

The formerly famous five of Faye, Lisa, Lee, H and Claire (in order of preference) appeared onstage in individual clear plastic tubes, in a manner oddly reminiscent of Spinal Tap. In what can only be described as a heart-stopping moment, Lisa’s opened early, but her showbiz experience meant she recovered well. Meanwhile, Lee was either struggling to do ‘the robot’ or having a panic attack, while Claire was struggling to move at all (yeah, so she’s put a bit of weight on, but who gives a shit? She’s in Steps!) It was the opening everyone had dreamed of and the following 2 and a half hours were nothing short of magnificent, although for the first time in my life I felt like a dick for not knowing Steps’ dance routines.

While the ‘solo’ section was perhaps a bit filler (with the exception of H’s heartbreakingly moving cover of ‘Don’t Stop Believing’), everything else was banging. For their encore, they naturally played ‘Tragedy’, although frankly this was an evening which was anything but tragic. And anyway, there are certainly much worse ways to spend a Thursday night in Manchester…