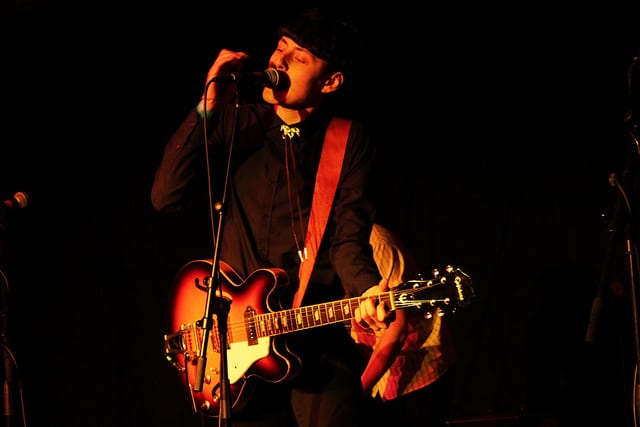 The Heartbreaks took to the small stage of the Ruby Lounge on Sunday the 6th May; for what also doubled as their debut album, Funtimes launch party. The energy of the four young males certainly overwhelmed the intimate venue. The rowdy crowd threw their arms and alcohol in order to praise this quirky quartet, as if they were their lifelong idols. In fact, this band is fairly new and the ensemble of their members relatively young. Too young to be considered anyone’s idol, but give it time. Their fan base is established and rapidly growing; and looking at what they have already achieved, the possibilities of their success are endless.

The set was noticeably short and lasted roughly 45 minutes. For exams, quality not quantity is emphasized and I would like to think that it applies here. The quality of the performance would get them a first class degree (from The University of Manchester, not Manchester Metropolitan).

It is difficult to listen to their music without recognising the influence of Morrissey. ‘Liar, My Dear’ is reminiscent of ‘The Last of the International Playboys’ and the opening riffs of ‘Delay, Delay’ play homage to ‘First of the Gang to Die’. That said, Morrissey must have recognised the potential within these young boys; and, last year they embarked on a prestigious support slot with him.

As an attractive, charismatic lead singer, Matthew Whitehouse must struggle to receive attention from fans, especially females. Kindly, his band mates left the stage to allow him some limelight, boosting his ego a little. He sang an acoustic version of ‘Jealous, Don’t You Know’ in which his emotion poured out though the raw vocals.

Concisely named ‘I Didn’t Think It Would Hurt to Think of You’ was the energetic finale, and proved a crowd favourite, leaving the audience singing along and the tune whirling on repeat in our heads for the remainder of the evening.

The Heartbreaks – Liar, My Dear