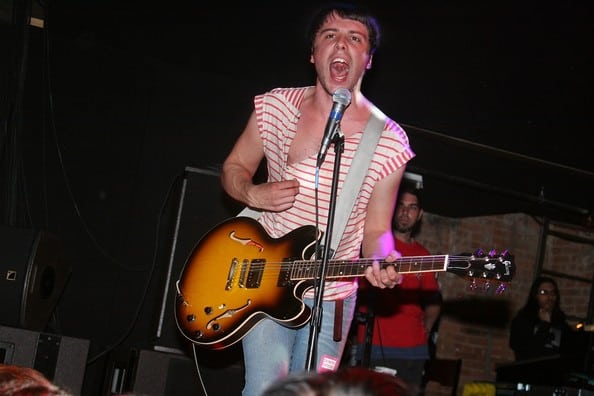 Ryan Jarman’s keen to play down the adulation that’s already coming his way just four songs into the set. “We’re just three weirdos from a garage in Wakefield, man!” Of all the weirdos from garages in Wakefield, these three are almost certainly the only ones that can count many thousands of people amongst those who are so heavily emotionally invested in their music. On the release of their third, breakthrough record, Men’s Needs, Women’s Needs, Whatever, Q Magazine called them “the biggest cult band in the UK”; the first 2 records, lo-fi, scuzzy and wonderfully rough and ready affairs that they were, had secured a zealous fanbase that spread far beyond the small Yorkshire town they set out from. They proceeded to take about as drastic a left turn as any band in their position could; unannounced, Johnny Marr turned up to a number of dates on their 2008 NME Awards Tour headlining run, and before the year was out, the former Smiths axeman was a fully-fledged member, contributing significantly to the following year’s fourth LP, Ignore the Ignorant.

A badly-misguided single release to tie in with their summer festival appearances in 2010, the erratic Housewife, provided incontrovertible evidence that Marr’s honeymoon period was over, and his amicable departure followed soon after; for the Cribs hardcore, dismayed by the cleaner, more commercial sound of Ignorant, this could only be a good thing, and when the announcement came that the literal band of brothers would record their next album between a Wakefield garage and a basement in Portland, Oregon, hopes were raised that the band’s next full-length effort could signal a return to their DIY glory days.

Such optimism wasn’t totally wide of the mark. The fabulously-titled In the Belly of the Brazen Bull, released just five days before tonight’s show, is not without its callbacks to The Cribs’ punkier past – scintillating opener ‘Chi-Town’ and latest single ‘Come On, Be a No-One’, both centred around Ryan Jarman’s screamed vocals, wouldn’t have gone amiss on the band’s debut record. That isn’t to say this isn’t a band that won’t evolve any further; ‘Anna’ and ‘Jaded Youth’, both aired tonight, take the band’s traditionally screechy guitars and marry them with the pop aesthetic that really reared its head on Ignorant, while the brooding ‘Back to the Bolthole’, stormy drums underpinning yearning vocals, proves that The Cribs can be anthemic without needing to have the audience jumping and screaming as one.

That said, there’s really no getting away from the fact that the jumpy-and-screamy domain is the one in which The Cribs truly excel live. The chorus-driven shoutalongs of ‘I’m a Realist’ and ‘Men’s Needs’ receive the evening’s most fervent audience reaction, but the impressively whole-hearted response to the more melancholy likes of ‘It Was Only Love’ and ‘Another Number’ – the latter of which so iconic with the Cribs ultras that the crowd shout the outrageously simple seven-note guitar riff back at the band – proves that there’s an emotional depth to this band that so many of the indie also-rans that they’re so often, and so wrongly, lumped in with are completely devoid of.

The evening’s highlight comes late in the set. ‘Be Safe’ is probably the greatest thing the band have produced so far, taking the screechy guitars and impassioned vocals that are near-essential for a Cribs track and, in a stroke of sheer inspiration, accompanying them with an apparently nonsensical poem written and read by Lee Ranaldo of Sonic Youth, who appears tonight by way of projected film. The subsequent arrival of Marr, apparently unable to resist the opportunity to play in front of a sold-out hometown crowd, treats fans to the best of both worlds where the back catalogue’s concerned. Polish, assurance and calculation are all conspicuous by their absence in the average Cribs live show, but there’s certainly no shortage of excitement – is this as close as a band with such a punk aesthetic will come again to the mainstream?

Tags: academy 1, Come on Be a Noone, Housewife, Ignore the Ignorant, In the Belly of the Brazen Bull, Johnny Marr, Live, The Cribs