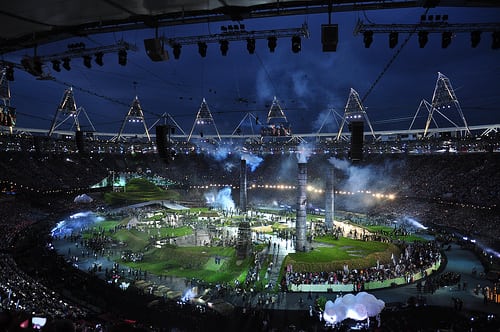 Pandemonium in Stratford caught the attention of the world. Photo: The Department for Media, Culture and Sport @Flickr

Is it a bird? Is it a plane? Nope. It’s James Bond and HRH Queen Elizabeth parachuting out of a helicopter. Not even superman could have seen that one coming.

Yes there were loads of sporty highlights this summer, but the opening ceremony of the London 2012 Olympics was as much a celebration of film as it was sport.

Danny Boyle’s “Bonkers Britain” opened the games with a bang, thanks to surprise appearances from the likes of James Bond and Mr Bean. On top of this, we had a movie montage celebrating British Film, the LSO playing the iconic theme to Chariots of Fire and an army of Mary Poppinses falling from the sky to shoo away a giant, inflatable Voldermort.

The point behind the chaos? Everyone loves a good film. Even Queenie couldn’t resist the smooth-talking 007! Whether in Britain or Beijing, America or Australia, newspapers all over the world were hailing the talented trio of Boyle, Bond and Bean.

2012 may well have been a summer of sport, but it was fantastic to see Great British cinema celebrated too. And why not? Film is one of the most talked-about industries in the world.

We’ve got an exciting year ahead for British, World and Independent film making, and the Mancunion film team are going to cover it all, so watch this space!