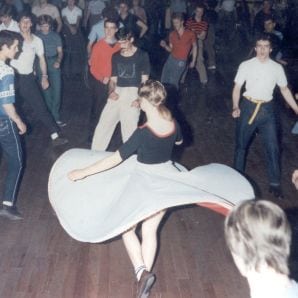 5 songs in the field of… Northern Soul

A minor hit in America, ‘Easy Mover’ was picked up by the scene at Twisted Wheel, Manchester. Infectious bass line and lyrics by Brenda Lee Jones, “Jean” of Dean and Jean, delivered in a gutsy vocal from the Continentals’ Loretta Reid. London Fog have been featured in Mayer Hawthorne’s podcasts for Stones Throw Records.

Synth-pop duo Soft Cell were notoriously influenced by the music from dance halls of the North covering both this Northern Soul favourite and Judy Street’s ‘What’. Despite the British version’s success, reaching #1 worldwide, Gloria Jones is still hailed the “Queen of Northern Soul”.

A suitably wonderful distortion heard at the beginning of the record leads into the reassuring falsetto and heavy beat. It’s uptempo rhythm lent itself to the frantic spinning, kicks and backdrops that could be seen at all popular Northern Soul venues such as Wigan Casino.

A real feel-good record, ‘You’ve Been Gone Too Long’ is punctuated by horns and has a driven beat. Ann Sexton has been sampled by the likes of Wu Tang Clan’s GZA, and in 2008 after a 30 year absence, embarked on a welcome return to performing.

In the latter days of the Northern Soul scene, ‘Footsee’ reached #9 in the UK singles chart. Released with Chuck Wood’s ‘Seven Days Too Long’ as a B side, this remixed track supposedly is overdubbed with crowd noises from 1966 FA Cup semi-final between Everton and Sheffield Wednesday.