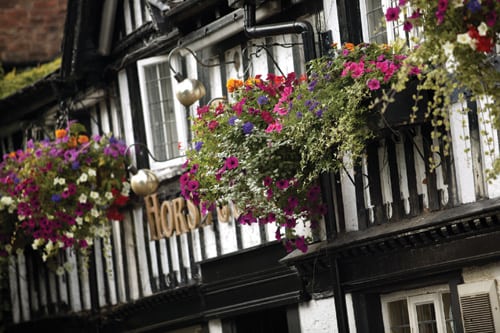 The Horse and Jockey pub in leafy Chorlton. Photo: University of Manchester

Filled with an excessive amount of vegan food shops, bars that seem to cater solely for floppy haired twenty-somethings, and twee cafes; Chorlton is not only a Guardian readers idea of paradise, it’s also a safe haven for anyone looking to escape the vodka-red-bull-swilling, Jack-Wills-wearing brigade that haunt most of south Manchester during term time.

For shopping your best bet is Beech Road, with McQueen offering rare labels and Nood, which stocks an eclectic mix of accessories and dresses, including owner Alison King’s own ‘AKA’ label. Coming off Beech Road and into the more affordable end of Chorlton, Fred’s, Wilbraham Road, is a small boutique which sells specially selected clothes that you won’t find on the high street for affordable prices. Meanwhile, the award for the most stereotypical shop in the area has to go the Creative Recycling Gallery, which sells fashionable trinkets and other goods made from recycled material with the broader aim of promoting “ethical and sustainable living”. I told you it was a Guardian reader’s paradise.

If traipsing around fashion boutiques and eco-friendly galleries isn’t your idea of fun, Chorlton also has a number high-quality charity shops stocking good books, clothes and other items donated by the neighbourhood’s liberal, middle-class inhabitants. While it also enjoys a number of characterful, independent café’s and restaurants; such as the wonderful On The Corner on Beech Road.

Selling afternoon meals and a varied selection of tea and juices, On The Corner also doubles as an independent record shop and regularly hosts live music, DJ-ing and art shows. Battery Park on Wilbraham Road offers a similar selection of food and drink to On The Corner, and boasts a menu containing locally sourced produce and fresh juices.

If you manage to pop into Chorlton on a sunny day, and that will be rare occurrence in Manchester, you can head to one of Chorlton’s lunchtime institutions to prepare for a picnic in Chorlton Meadows.

Barbakan Delicatessen, Manchester Road, and Unicorn Grocery, Albany Road, specialise in freshly baked bread and sell ingredients from all over Europe. Though because selling predominantly organic, fair-trade produce doesn’t come cheap; prepare to be taken aback by prices. In Unicorn you can even buy a vegetarian haggis, though whether that’s an incentive to visit the shop or not I don’t know.

If you’re planning an evening out, Yakisoba, on Barlow Moor Road, is a fantastic Asian fusion restaurant offering Thai and Chinese cuisine at reasonable prices. A bowl of soup so large that you could swim in it and a sizeable bento box will only set you back £10. For something less formal Pi, Manchester Road, is a smallish bar which sells a range of excellent beers and serves up tasty pie and mash for a fiver.

To get to Chorlton you can catch either the 85 or the 86 from the RNCM. It’s just 15 minutes from Oxford Road by bus. Alternatively you can get on a tram to St Werburgh’s Road from the city centre; a journey which only takes between 15-20 minutes.