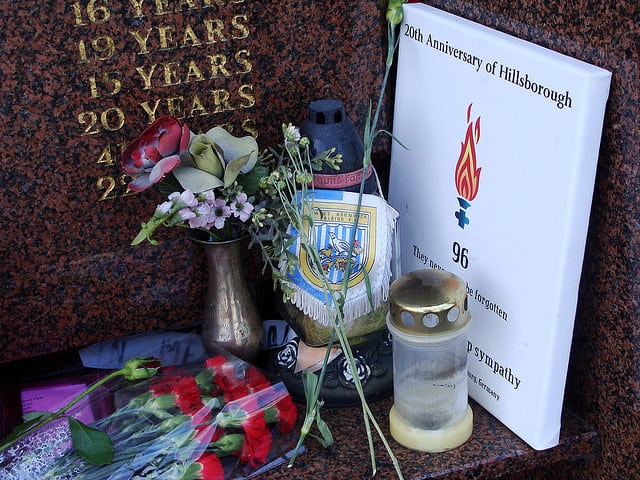 Cards and flowers adorn the Hillsborough memorial on the 20th anniversary of the disaster (Photo: Ben Sutherland)

“The truth is out today. Justice starts tomorrow”

The 23rd of September saw Liverpool’s first home game since the publication of the Hillsborough Independent Panel’s report.  Their opponents, almost inevitably, were Manchester United. It’s a fixture which proves a constant reminder of just how far their footballing stock has fallen.

Gone are the days when Liverpool were revered worldwide as Britain’s most famous footballing export. According to the current league table, they aren’t even the best team on Merseyside.

Gone, also, are the days where the events of the 15th of April 1989 are attributed in any way, shape or form to the actions of Liverpool fans on that day. Gone are the obstacles to the truth, perpetuated by those with only self-interest at heart.

The lies have been exposed and the truth, as unearthed by one of the most thorough inquiries in British judicial history, is that journalistic integrity, corporate liability and policing responsibility were abandoned.

Abandoned in the run up to the game when, despite numerous warnings, the Football Association declared Sheffield Wednesday’s Hillsborough stadium suitable for the FA Cup semi-final.

Abandoned by Superintendent David Duckenfield, whose incompetency led to 3,000 fans being shepherded into a part of the ground built for no more than half that number.

Abandoned by several senior policemen, who refused to allow 42 ambulances onto the pitch as people lay dying for want of basic medical attention.

Abandoned by those who sought to erase the honest accounts of hundreds of rank-and-file officers, a cover-up which began even as the disaster was still unfolding.

Trevor Hicks, to whom the headline quote is attributed, lost both his daughters at Hillsborough. He and all the families have had to endure not only the loss of their loved ones, and a stream of unanswered questions, but an incessant tirade of slurs, lies and fallacies about the actions of the police, the actions of the emergency services and even the actions of the fans themselves.

Thanks to newspaper editors, journalists and senior politicians, the lie has been continually perpetuated that this was not only Liverpool’s tragedy, but Liverpool’s fault.  The self-pity city once again looking for someone else to blame. At last, these fallacies have been put to bed.

At last the world might understand that this isn’t just Liverpool’s tragedy. Nor is it merely football’s tragedy. The families never wanted pity; they waited 23 years simply to hear the truth. They should not have to wait another 23 years for justice to be done.

Dan Jones is a lifelong Liverpool supporter, who regularly attends matches both home and away; his passion has taken him to over ten countries following his team.