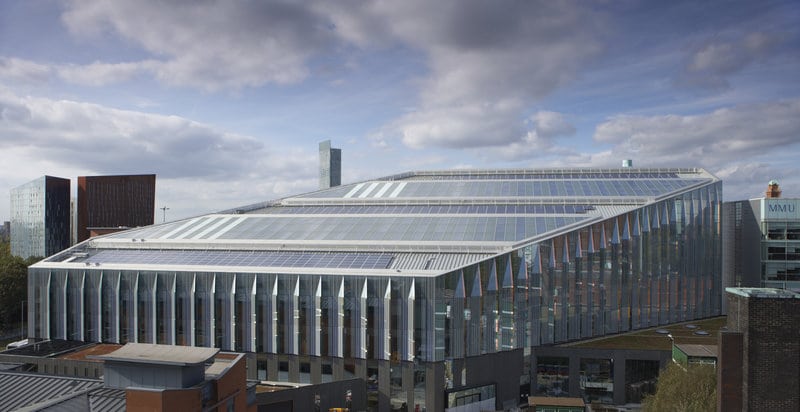 The award-winning stucture's facilities are "miles ahead" of other universities in the area. Photo: Manchester Metropolitan University

Manchester Metropolitan University’s new award-winning £75 million Business School has been praised by business people from all over the North West.

The endorsements came as around 200 business professionals attended the launch of the new combined Faculty of Business and Law.

“It’s fantastic for MMU,” said John Buckley, from the Federation of Small Businesses. “[It is] miles ahead of anything any other universities in the area have got.”

David Fox, Director of Business Development at John Smith’s Group said: “The facilities for students are mind-blowing.” He saw the building as “a real statement of intent, a demonstration of confidence in the future.”

Vice-Chancellor of the University, Professor John Brooks, echoed this sentiment: “It’s an ambitious building which underlines a confidence around MMU which we trust will raise ambition and up everyone’s game,” adding the structure was “the jewel in MMU’s crown.”

Business Studies at the University has improved this year in national rankings, up seven places to 61 in The Complete University Guide.

The building won ‘Best Education Development’ in the North-West category of the LABC Building Excellence Awards, which promote the design and construction of safe, accessible and environmentally efficient buildings.

It features varied styles of teaching rooms as well as different types of study spaces to meet the needs of groups and independent students. It is also a new ‘Student Hub’ with a restaurant, showers and a roof terrace.