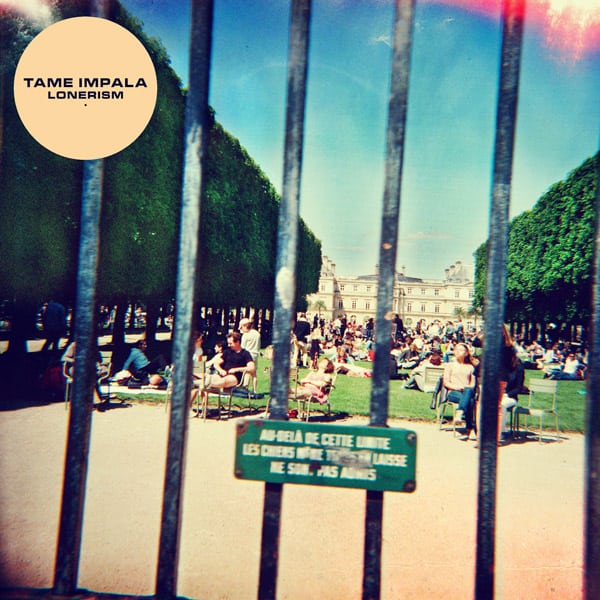 If you’re anything like me, you might be spending the summer’s dying days wondering what it is that people so love about it; weather as persistent as it was horrendous and the depressing ubiquity of Boris Johnson’s absurd head of hair made for one of the more underwhelming holidays of recent years. You could do worse, by way of a reminder, than to get hold of a copy of Tame Impala’s debut full-length, Innerspeaker, which stands as a sonic representation of everything good about the calendar’s middling months; a hazy, psychedelic treat of a record, best enjoyed on a sunny afternoon.

Innerspeaker took Tame Impala right around the world – from headline tours that steadily increased in scale to supporting Foo Fighters at Milton Keynes Bowl – and it wasn’t until late last year that Kevin Parker – the brains and, for the most part, brawn of the outfit – was able to record new songs that had been on the back burner for some time, in his native Australia. The result is Lonerism, a record that suggests that the laidback outlook of the last album extended to Parker’s attitude towards the traditional pressure that comes with releasing a follow-up; this is as assured a sophomore record as I’ve heard for some time.

Ironically, the band have moved on – at least in part – from the carefree pastures of their last effort; as the title suggests, Parker focuses lyrically on themes of isolation and displacement, and there’s a degree of purpose, perhaps even aggression, in the album’s sound to reflect that – the pianos pound on ‘Apocalypse Dreams’, looped, ‘Tomorrow Never Knows’-esque drums clatter through opener ‘Be Above It’, and ‘Elephant’ is dominated by the sort of stampeding, bluesy riff that The Black Keys would be proud of.

That’s not to say the band’s signature grooves are missing in action on Lonerism; ‘Mind Mischief’ is a classic Impala slow burner, whilst ‘Why Won’t They Talk to Me?’ brings the record’s pace grinding to a near halt with its spaced-out melancholy. The record’s greatest triumph, though, is the delicate balance it strikes between celebrating its influences and outright copying them; the album wears its admiration of the Woodstock age of psychedelia proudly on its sleeve, but not so much so that there’s nothing new or exciting here – it’s the freshest sounding rock record of the year. As odes to the sixties go, Tame Impala do for weed and acid what Mad Men does for whisky and cigarettes; they’ve made that era sound as good as that show makes it look, and produced a genuine thrill of a record in the process.