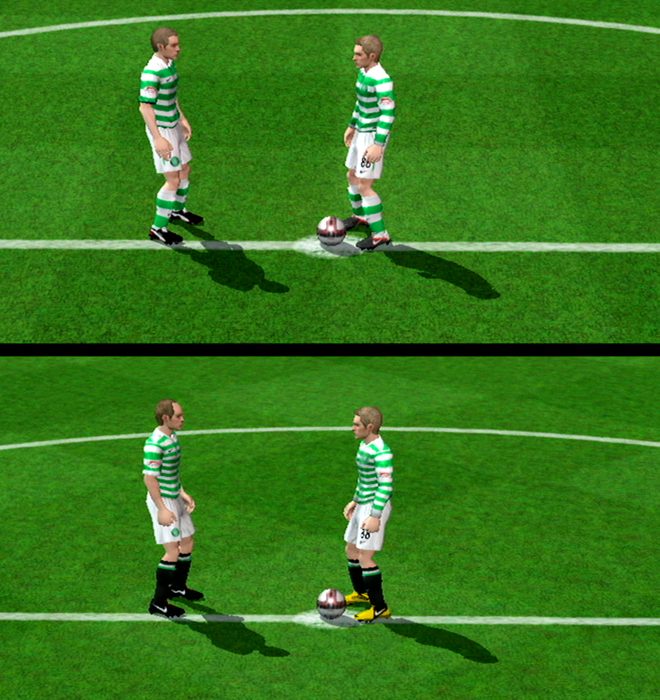 Spot the difference. Screenshots from FIFA 12 and FIFA 13

When I was looking for someone to review FIFA 13, someone suggested I copy and paste a review of FIFA 12 and change the dates. This is unfair, FIFA 13 has been an improvement on FIFA 12 offering better graphics and improved gameplay.  At least, that would be the case if you bought it for any console other than the Wii.

EA have released a near-identical version of FIFA 12 as FIFA 13 on the Wii, apart from updating the game with the summer’s transfers, new kits and changing the soundtrack, EA have released the exact same game two years running.

There are no new modes, no graphical improvements, no AI improvements; it would be almost impossible to justify a purchase of FIFA 13 on the Wii to someone who already has FIFA 12.

One user commented “FIFA is one of the best selling titles on the Wii. Why wouldn’t they bother to at least give some token improvements?”.

While another said “Practices like these beg the question, “Are EA’s resources stretched so thin in some areas that they have to cut corners like this?”

With the Wii U coming out in a matter of weeks, it’s clear that developers have given up on the Wii. Electronic Arts Chief Operations Officer (COO) Peter Moore told tech magazine Wired “Year on year, Wii has just dropped, and clearly we don’t make games for it anymore”. Even so, this will offer little consolation to the gamers who were duped into buying this, under the assumption they were getting a new game.

Interestingly enough, it should be possible for a game like FIFA to update kits, transfers, and music through downloadable content, making the annual release obsolete. Sadly, this is unlikely to catch on though, because as long EA holds the licenses and people are willing to pay they’ll milk the franchise for everything they can get.

The copy/paste approach wasn’t isolated to the Wii, with FIFA fans on the PS Vita taking to social-media to complain about FIFA 13 being identical to FIFA Football released in February. Users have posted negative reviews on Amazon and Metacritic.

FIFA 13 is great game on the PS3 and 360, and it’d be shame for it to be overshadowed, but if EA continue to pull stunts like this, they deserve to be called out.