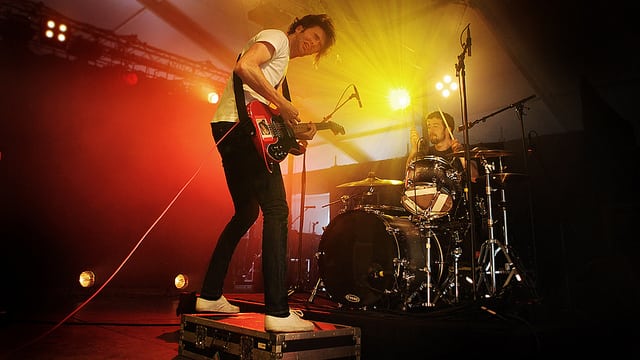 Japandroids arrived at Sound Control in the thick of a mammoth world tour in support of Celebration Rock. Photo: NRK P3 @ Flickr

Indie-Rock is a term bandied around a lot, but Japandroids are one of the few bands that really exhibit the latter half of that tag. They offer a welcome respite amidst the current trend of misery in indie music, with bands such as Alt-J and The xx at the forefront. Celebration Rock is the name of the album this current tour is promoting, and also acts as an epitomising band motto. The duo open with a five-minute long jam and casually throw an AC/DC solo into the middle of one song; Japandroids are all about having a good time through rock music, and their mood is infectious.

Song after song, the distortion pedal stays firmly down, the drum beats are boisterous and the enthusiasm emanating from the band is palpable.  ‘Younger Us’ induces the first crowd surfers of the night, and with the floodgates open there’s jubilant chaos from then on in. ‘The Nights of Wine And Roses’ proves the pair are enjoying themselves just as much as the audience as they euphorically “yell like hell to the heavens”. Frontman Brian King even makes errors fun by joking “We don’t fuck up, we just make live remixes”.  By the time ‘Wet Hair’ is unleashed the song title applies literally to all those present in the sweat pit that Sound Control has become.

Japandroids’ desire for everyone to have a great time is exemplified when they invite a journalist, who has been conspicuously writing on a notepad throughout the show, up to join them and perform a stage dive. King declares the exultant chanting of “Notepad!”, for the newly christened folk hero, that accompanies this act as his “favourite gig moment ever”. I leave the venue with my exuberant mood only slightly marred by the fact I wasn’t more obvious with my own note taking.