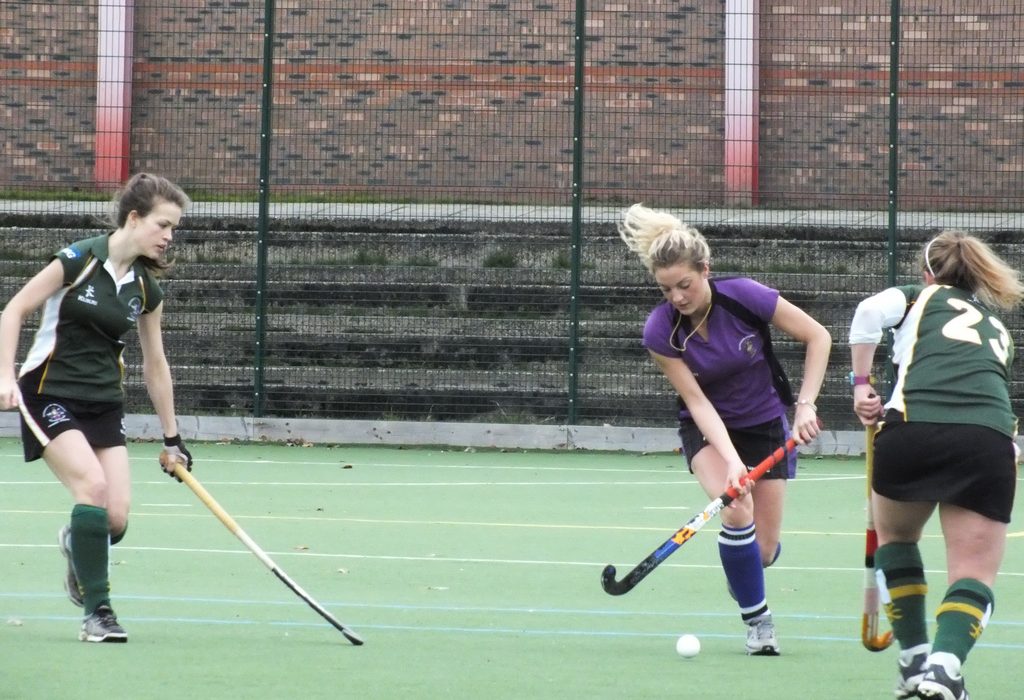 Manchester back on track with victory over Nottingham

Two penalty strokes from Sam Davies and an excellent goalkeeping display from Helen Stevenson saw Manchester beat Nottingham in an entertaining contest at the Armitage Centre.

Despite last week’s 5-0 thrashing at Loughborough, Manchester looked like a team who are now very much settled in the Premier Division, and they played confident, attacking hockey in recording their first win since the opening day of the season.

Captain Tulisa Fateh will be particularly pleased with the way her team responded to a late Nottingham charge, as they calmly saw out the victory by retaining possession and starving the visitors of goal-scoring opportunities.

Fateh and her defence were kept busy in the opening stages, with Nottingham playing fast, flowing hockey right from the off. An early move from the visitors was halted by a sprawling save from Helen Stevenson, before a sharp interception from Manchester’s Georgina Everett released Hannah Cobbold, who did well to test the visiting keeper as she ran away from goal.

It was a pattern which predominated for much of the first half – Nottingham dominant but wasteful, with Manchester sharper and more incisive on the break – and it was of no surprise that a swift home counter-attack led to the first goal of the game. After collecting it near the halfway line, the hosts moved the ball cleverly before it was illegally blocked inside the Nottingham D, and Sam Davies tucked away the resulting penalty stroke.

Despite not making the most of their possession, Nottingham were arguably the better side, and in the 26th minute their dominance was finally rewarded. A well-worked penalty corner drew another stop from Stevenson, but her defence failed to clear the rebound to leave an easy tap-in for the visitors.

After levelling the scores, Nottingham grew in confidence and began to open up the home defence with alarming regularity. Numerous chances were spurned in the final minutes of the half, with Stevenson again saving brilliantly to keep the score at 1-1 going into the break.

Although they might have been fortunate to be level at half-time, Manchester made the most of their luck in a superb second-half performance.

It was a performance that was typified by the second goal, which resulted from the finest move of the match. After a quick exchange of passes, the impressive Tori Canning escaped the attentions of two Nottingham defenders down the right flank before crossing sharply from the by-line into the opposition D, where Everett timed her run perfectly to slot home.

After a relatively quiet opening period, England international Sophie Crosley frequently demonstrated her quality in the second half, and it was through one of her many mazy dribbles that Manchester further cemented their lead. After breaking through the Nottingham defence, she turned away from the onrushing keeper, who could do little but bundle Crosley to the floor.  The referees awarded a second penalty stroke, and after a considerable delay (due to the prolonged protests of the visitors), Davies again put it away with ease.

Both teams were guilty of losing their discipline in the final 20 minutes, with Manchester losing three players to yellow cards and Nottingham frequently giving away soft fouls as they tried to get back into the game.

However, the home side remained solid against a wave of Nottingham pressure, and a late second for the visitors proved to be a mere footnote as Manchester calmly saw out time.