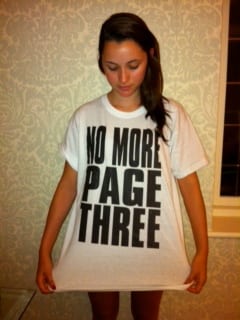 The No More Page Three campaign has garnered a lot of support. Photo: Lucy-Anne Holmes

What inspired you to make a change?

The change was inspired during the Olympics when Lucy Holmes picked up a copy of The Sun on the tube and was surprised to see that there wasn’t a topless girl on page three. That was until she hit page thirteen and saw that instead, the day’s model has simply been moved back ten pages and was still by far the largest image of any woman in the paper, despite it being the day after so many fab female team GB athletes had won gold, including Jessica Ennis.

Seeing this, she began to think about what this said about women in society, and about what children thought when they looked at the newspaper and saw page after page of pictures of men in clothes, doing things like running the country and achieving in sports, and a massive image of a woman standing in her knickers showing her breasts to men.

She thought about how Page 3 had shaped her. The more she thought about it the more passionately she felt that these pictures shouldn’t be there. She started an online petition, a Twitter and Facebook group to see if she was the only one who felt this way.

And next thing I know, I’m tweeting at all hours of the day fighting for something I really believe in. It’s time for change.

The response has been, on the whole, absolutely incredible. I don’t think that any of us saw it coming and it just keeps going from strength to strength. We’ve been written about in both The Guardian and The Independent as well as various women’s magazines. The male response to the campaign has really knocked me for six as well; there are so many lovely blokes out there who genuinely do believe it’s time for page three to go and that it objectifies women. It was so refreshing and positive! We’ve hit 52,000+ signatures on our change.org petition, over 10k Twitter followers and over 4.5k likes on Facebook.

What has been the highlight of the campaign so far?

For me, it’s the fact that we’re in this month’s Glamour magazine! I’m sure the other team members will say that celebrity support from the likes of Eliza Doolittle and Jennifer Saunders, having the Loose Women talk about us and gaining support from so many MPs are all highlights worth mentioning too… not forgetting the fact that on November 18th we’re putting on a comedy gala in London’s West End called Stand-Up To Sexism, which is going to be great! We’ve even had creative support, including an amazing poem from Sabrina Mahfouz ( http://www.youtube.com/watch?v=0G1-fxpOAXs )

Have you had much criticism? If so, how have you dealt with it?

Of course, there are always people who think what we’re trying to do is ridiculous. A lot of the time, I think it’s because they are misunderstanding the campaign. We are not out to ban glamour modelling or stop the girls doing what they do, we are just trying to get the images taken out of the biggest selling paper in the country so that women can be portrayed equally to men in our day to day press.

How important do you think it is for young people to voice their opinions? Can we really make a difference?

The youth in this campaign and any campaign is so important. When we look back at what Clare Short tried to do in the eighties, she was accused of being an old fuddy-duddy, but with the core team of the campaign all being below forty, there is no way anyone can play that card with us this time round. As a student, I feel like I have so much scope and so many resources that will really allow my voice to be heard. Through the union both at University of Manchester and at MMU, I really hope to spread the message of the campaign. Following all the amazing things so many young people have achieved this year, especially following London 2012, I really do believe that people aren’t simply writing off the youth any more and that actually, we can make a change.

Link to the petition