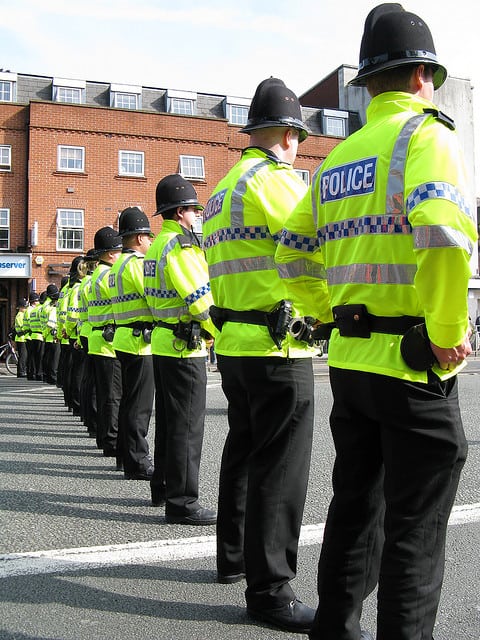 The apprentices will spend their days mostly doing paperwork, rather then going on the beat. Photo: Matty Major

GMP hires apprentices to work for under Minimum Wage

Great Manchester Police is recruiting apprentices to be paid under the National Minimum Wage, in a cost-cutting drive.

There are 22 apprenticeship positions available, whose role will be to help the neighbourhood teams. They will be paid £10,500 a year, while the minimum wage is around £12,000 a year.

This comes as a Manchester has just elected a new Police Commissioner, who will receive a salary of over £100,000 and needs no prior experience in the police force.

The apprentice role will mostly involve doing paperwork rather than being on the beat, and police force bosses are hoping to recruit from ‘hard-to-reach’ communities where people tend not to consider a career in law-enforcement.

They hope to recruit people with ‘potential’ rather than experience.

The title given to those on the year-long apprenticeships will be Operational Support Officers (OSO).

After six months in the job the wages would rise to the equivalent of £12,900-a-year and once it was finished the apprentices could join the force either as civilian workers or constables in the future.

Chief Constable Sir Peter Fahy said that he hopes the recruitment of young blood will help to keep his workforce fresh.

A report published on the scheme said: “The introduction of apprentice OSOs in GMP represents a cost-effective approach to workforce planning.

“If the OSO apprenticeship scheme is successful, there is considerable potential to extend apprenticeships across the wider organsiation.”

One police officer said: “It’s policing on the cheap.”

GMP declined to comment, but Councillor Steve Bashforth, of Greater Manchester Police Authority, said: “It’s an imaginative way to get people into work who may not get that opportunity.