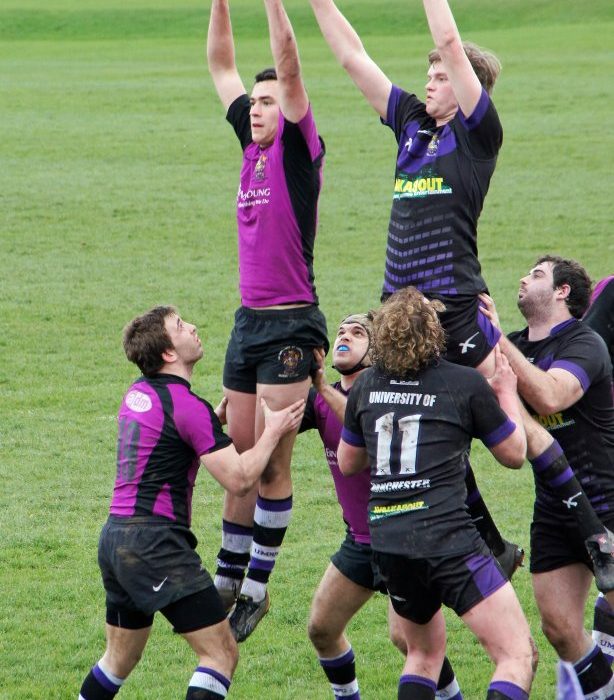 Bridging the gap between sports and the arts... Laurence Toynbee's Close Passing Among the Forwards (1961). Photograph: Herbert Art Gallery & Museum

As I sat on the bus home after a match of Rugby League, watching the attempted courting of the Women’s football team who we were car-pooling with, I heard one of the women footballers saying ‘oh, rugby league, that’s the one that’s not on tele, isn’t it?’

Rugby League has always been living in the shadow of its older brother Rugby Union. The two represent an age-old class struggle; the Universities of Oxford and St. Andrews playing Union, contrasted with the labourers of Huddersfield and Yorkshire playing League.

The University of Manchester has its own unique take on this precarious relationship, and unfortunately it seems to be a relationship based on denying all together the existence of the other.

I will start from the outward appearances. First of all, even before I recently converted to playing Rugby League, I never particularly liked yellow chinos. Wearing your Sunday best to Tiger-Tiger on a Wednesday night, a club with a seemingly ‘no shirt policy,’ is a puzzling one. This has led to the affectionate name ‘chino wankers.’

‘Lad mentality’ is something that is often attributed to rugby. I experienced ‘Welcome drinks’ for the first time this year, and one string vest and yellow body paint later my initiation had begun. It was all in good fun though, the worst part of the night chewing 4 dry Weetabix in an allotted time, to the cheering of my fellow teammates.

Compare this to my union friend, however, who, after purchasing one £30 leather bondage suit was chewing on dog food and playing ‘Edward Cider Hands,’ an invention surely taken from the heart of the Lad Bible or UniLad’s twitter feed, was lovingly rewarded with the club tie, a nice touch.

Putting this aside, performance on the pitch is where it really matters.

It is clear that Rugby Union is the wider played sport, with the university boasting three teams and a development side, whereas the League team only has two. Both teams also play at a high standard. The Union team find themselves in the Premier North B, one step off the top of the Rugby Union league tree and playing in the same league as the Loughborough University 2nd team. The League team find themselves in the top Premier division, North West 1, and last season won the National shield, and have finished in the Top 3 for the past 5 seasons, cementing themselves as one of the top League university teams in the country.

Although League comes out on top in terms of BUCS league performance, there is undeniably only one sporting fixture that takes centre stage for the university: the Rugby Union Varsity. The stadium, atmosphere, genuine competitive nature of the game, Russell Group related chants and, of course, the occasional dignity stricken strippers create an excellent night of entertainment. It is a fixture that’s attendance is rivaled only by the Ice Hockey Varsity.

This, of course, is not to say that all other matches are redundant in shadow of the Varsity; the League team play both MMU and MMU Cheshire in league matches, so far obtaining a victory and a loss. The matches arguably have more meaning to the team as they can help in terms of league progress. However, compared to the hype of the Union Varsity, the matches seem to everyone who isn’t involved in them as being just another league fixture.

It is a battle which will rage on, despite claims from Union players that ‘we play your game for a warm up’ and the brilliantly constructed pun of Rugby ‘Yawnion’ from the League camp. Both codes should be respected, but as proud as Rugby League player I am, it is still a developing sport in this country, if not the world. For the time being, Union will be the sport that prevails.