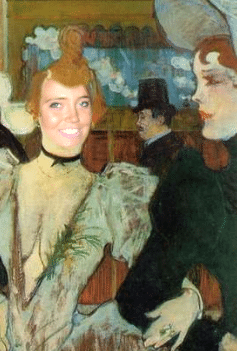 1) He was born Henri Marie Raymond de Toulouse-Lautrec-Monfa in 1864, to an aristocratic French family

2) His parents were first cousins

3) He put himself into his painting ‘The Moulin Rouge’, and is pictured walking next to his cousin Dr. Tapie de Celyran

4) He fractured his legs at 14, and they stopped growing, meaning as an adult he only stood 4 ft 6 in tall

5) He contracted syphilis from one of his favourite models, a prostitute named Rosa la Rouge

7) He invented a cocktail, a mix of absinthe and cognac, called the ‘Earthquake’

8) Although his paintings were not received well in his lifetime, his painting ‘La blanchisseuse’ sold for 22.4 million dollars in 2005