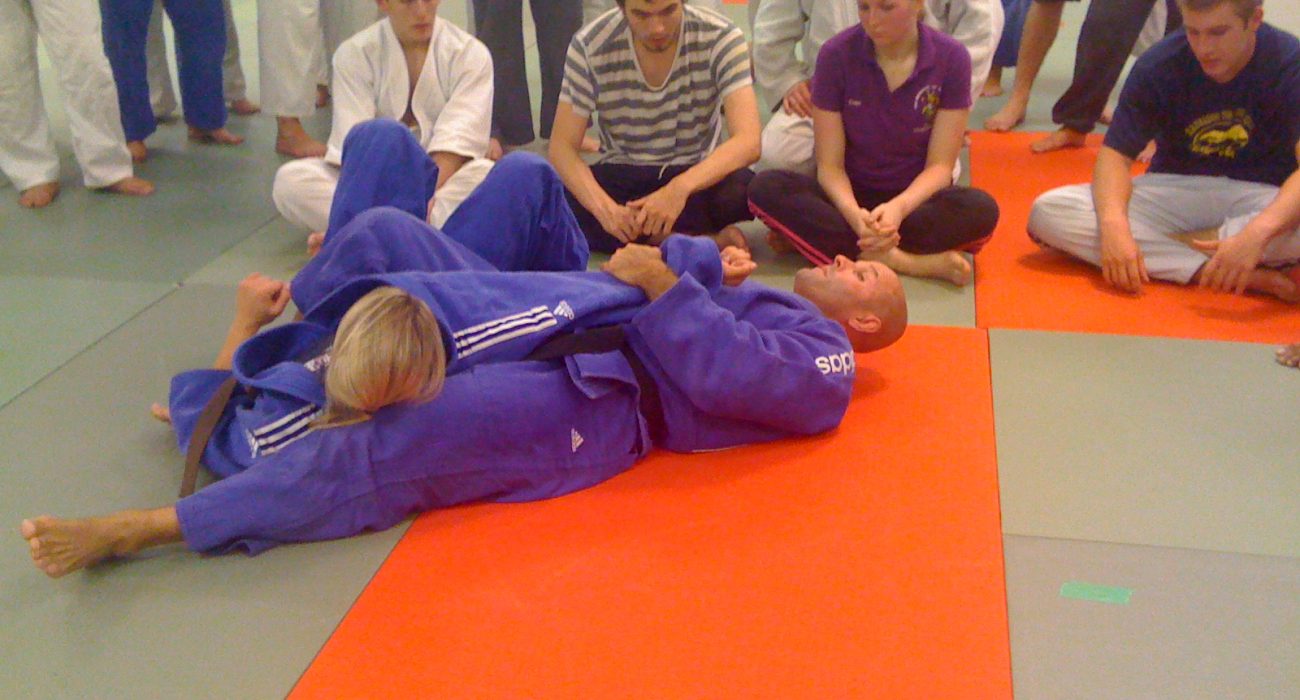 The aim of Judo is to throw your opponent to the floor until they tap out or you have held them there for thirty seconds. Photo: Kate Bullivant

They were involved in last week’s Society Swap, and if Judo caught your fancy Joseph Perry explains a little more about what Judo is and how you can get involved.

“In simple terms Judo is a type of wrestling and you can think of it as a fighting sport rather than a traditional martial art. The aim of Judo is to throw your opponent to the floor until they tap out or you have held them there for twenty five seconds.”

Their weekly training sessions are run by coach Steve Pullen, who boasts an MBE for his achievements and is also a 6th Dan. This grade is only achievable through exceptional contribution to the sport. Joseph explained how having such an experienced coach boosts the standards of everyone that takes part: “A massive advantage about having Steve with us is that he is ludicrously well-connected. He brings people to the mat we simply would not have otherwise. People like Simon Jackson (a three-time Paralympic gold medallist) and Steve Ravenscroft (Former British and Commonwealth Champion).  Each week Steve runs us through free-practice, technique drills and fitness, which is at the end. It means that you get the most out of the sessions, not only the essential skills but also fitness and a lot of fun!”

You have to wear a jacket and trousers, while different coloured belts are awarded as you progress. From what I could see at the training session there were a lot of blue and black belts, which I was told is quite impressive. The Coach Steve Pullen then told me that for each student he has specific targets and this is usually to get them to black belt by the time they leave Manchester. Having goals and a focus means that the members are really passionate about Judo and have the drive to get better and better. If you want to get involved but don’t have the right kit, this is not a problem because there are a few spares to go around.

Each year, they take part in a series of competitions across the country. Some of their members were very successful at British Universities and College Sport (BUCS) competition, coming home with one gold, one silver and two bronze medals. “We want to continue the high standards, if not make them higher! We’re also working towards making Judo a more cohesive club. We’ve also had a very good intake of women to the sport this year which is really encouraging, especially with the achievements of Gemma Gibbons and Karina Bryant in the Olympics this year, securing silver and a bronze medal.”