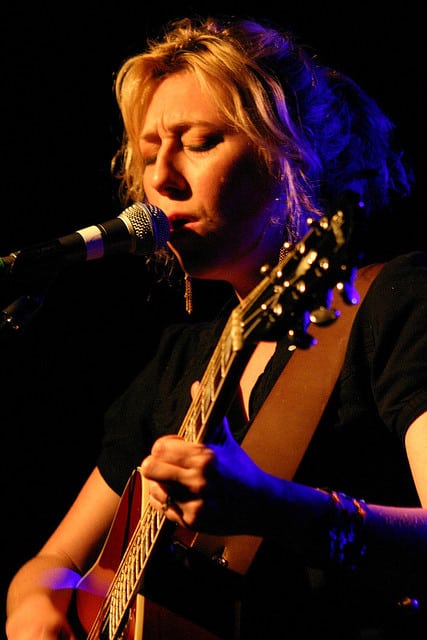 Wainwright is aiming to step out of her brother's shadow with 'Come Home to Mama'. Photo: Christoph! @ Flickr

You’ve probably heard of Rufus Wainwright; he’s one of his generations most fascinating artists, having perfected his dramatic, often operatic brand of pop music across an eclectic, seven-record oeuvre that spans the past decade; he’s also appeared on countless film and television soundtracks, often with original work, and has even written and staged his own opera, Prima Donna, which opened here in Manchester back in 2009. His sister isn’t quite as well-known, a fact neatly underlined by her performing at a sparsely-populated Ritz just a week before Rufus plays a sold-out Apollo, but her own repertoire is every bit as interesting, and eccentric, as her brother’s.

Martha Wainwright’s only real mainstream exposure to date came in 2006, when she managed something most of us thought impossible by injecting some genuine feeling into a Snow Patrol record, with a stirring turn on ‘Set the Fire to the Third Bar’. In the year’s since she’s built a modest,  but diverse, back catalogue, segueing between indie rock, folk and pop on her records and even releasing an album of Edith Piaf covers. It’s a variety that spills over into the live show, with Wainwright opening the show with an acoustic number from her self-titled debut before moving onto the guitar-driven ‘I Am Sorry’ and electro-tinged ‘Four Black Sheep’, both from her latest record, with the full band, which tonight includes Andrew Whiteman of Broken Social Scene and Mr. Martha Wainwright, Brad Alberta, on bass; for reasons undisclosed, he’s dressed up as a monk for tonight’s performance.

The new record, Come Home to Mama, delves lyrically into the changes in Wainwright’s personal life since her last full-length album; her marriage to Alberta and the birth of her first child are covered, as well as the passing of her mother, Kate McGarrigle, whose presence is felt throughout tonight. Wainwright covers a number of McGarrigle tracks – referred to between songs as ‘Kate’, not mum – with ‘Proserpina’, the last song written by McGarrigle back in 2009, proving both an album and set highlight. It’s when Wainwright draws upon emotional content as heavy as this that she’s at her most impressive live; the raw passion in her vocals is intoxicating – she howls rather than sings, turning in a stunning rendition of ‘Stormy Weather’ and more than doing justice to the couple of Piaf numbers that sneak onto the setlist.

The constant back and forth between acoustic and full band performance, and indeed between tracks that make full use of Wainwright’s intense vocal delivery and those that use it as just another instrument, lends the set an disparate feel by no means  atypical of her recorded output, but still frustrating. In terms of sheer talent, there’s little in the way of a gulf between the Wainwright siblings; she’s got a better voice than her brother and is almost as good a songwriter, when she wants to be, but tonight the solo tracks are unequivocally brilliant while the more experimental numbers with the band are decidedly hit-and-miss – perhaps figuring out how to play to her strengths will be key in bridging the popularity gap between herself and Rufus.