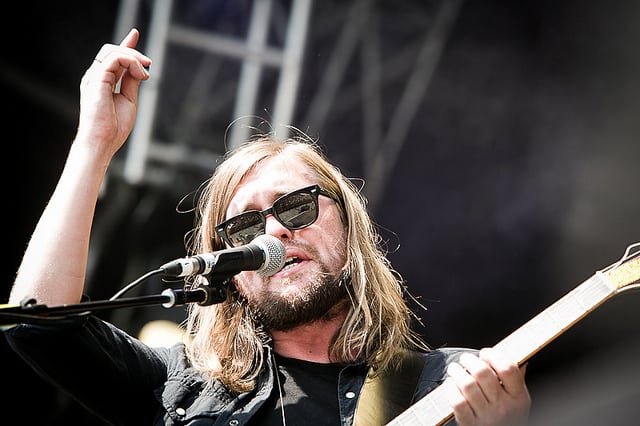 Band of Skulls delivered a polished set at the Ritz. Photo: Michael Dornbierer

Folks begin the night with material from their hot-off-the-press debut album, and what they lack in physical movement, they almost make up for in dynamism, with a diverse performance full of organs, pop vocals and gritty britpop bounce. The band’s set mixes the odd track that punches like the Arctic Monkeys, flutters like The Feeling and sings like Josh Homme all at the same time with slower, more turgid efforts that just seem to drain the band’s momentum. Despite this, however, they pull off a cracker of a Christmas song, replete with great melodic guitar work. They finish, appropriately, with ‘Skull and Bones’ and prove a fine warm-up for the main act.

Band of Skulls, since their inception, have boasted a huge sound that belies the fact that they are only three in number, but tonight show exactly how diverse they can be when they want to. They open with ‘Sweet Sour’, a bluesy, in-your-face stomper with a war chant of a chorus. Lead vocalist/guitarist Matt Hayward is coolness personified as he struts about the Ritz stage, scraping the guitar over tracks from across the band’s back catalogue. On the other hand, the gentle harmonies of ‘Cold Fame’ are teased as much as possible before providing the scream-your-heart-out qualities of a main stage festival act.

They strike an amazingly delicate balance that flicks between outright epic and intimacy, but the most impressive thing about this performance is that you just never feel disconnected from the band. Band of Skulls are designed for the stage – see them live to experience them properly.