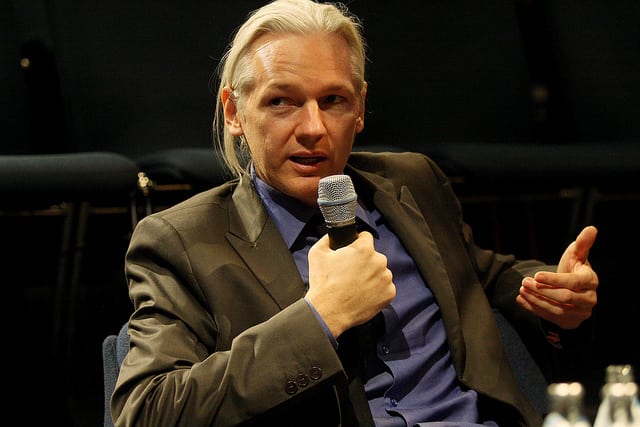 The Oxford Union were right to give Julian Assange a platform

Students waited in the snow, some for hours, to watch Julian Assange give a video address to the Oxford Union last week. The event was not however popular with everyone at the university, with around 50 Oxford students shunning the address and instead remaining outside in the snow. They stayed outside to protest against the Union giving a figure like Assange a platform, considering his refusal to face trial in Sweden over allegations of sexual offences. Many are now asking if the Oxford Union were right to host such a controversial figure, saying that it was nothing more than a cynical move to bring in crowds.

The motivations the Union had in inviting Assange may well have been less than perfect. But no matter what those motives were, Assange’s invitation should be applauded, as it has succeeded in reigniting debate surrounding his case. Assange is back in the papers again, and back in the papers too are condemnations against his refusal to go to Sweden and stand trial. Without events like Assange’s invitation to the Oxford Union, he would remain an Ecuadorian embassy hermit. Safely hidden away from the public eye, he would continue to avoid confronting the allegations against him. Now, the pressure is back on.

The protesters outside Assange’s address should be admired for their sentiment, protesting to stand in solidarity with all those across the world who have suffered from sexual violence is to be applauded.  I like to think that had I been in Oxford that night, I too would have stood together with the protestors. My protest however would not have been against the Oxford Union, but against the man being broadcast to the crowds inside. And despite the mischaracterisation of the protest by many in the media, this is indeed what many of those protesters came to protest about – not to support a blanket no platform policy against Assange.

The job of the Oxford Union is to facilitate debate, and that is exactly what they have done by inviting Assange to speak. They sparked debate within the debating chamber not only concerning issues such as WikiLeaks and cyber terrorism, the issues on which most students came to see Assange speak on, but students also had the opportunity to confront Assange on the allegations he faces. The fact that most of the answers he gave on this were pretty rubbish and evasive can hardly be blamed on the Union– this was down to Assange and he should be further criticised for it. Debate also went on outside the chamber, on the streets of Oxford and in the media, and importantly it has largely been in condemnation against Assange’s refusal to go to Sweden.

Assange may well be innocent, but because of the nature of the allegations against him it’s crucial he goes to Sweden and faces those allegations. Guilty or not, people the world over who have suffered sexual offences need to know that any allegations of this sort are treated seriously. If they aren’t, victims of these crimes don’t come forward. But keeping Assange out of the public eye is not the way to achieve this. The more he’s in the media, the more pressure can be put against him. By all means protest against Assange, but the Oxford Union were fully right to host him. It’s much easier to condemn someone given a platform than someone who is silenced and kept out of public view.