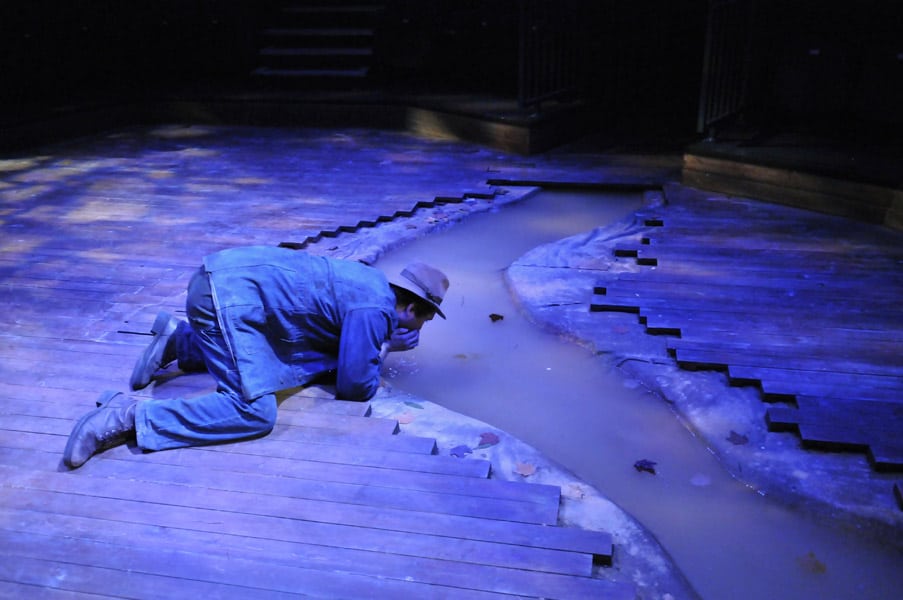 Just a fifteen minute train journey from Oxford Road station, The Bolton Octagon has a well-earned reputation for creating some of the (if not the) best original theatre in Greater Manchester.

This must be made a point of, before I go on to suggest that this particular interpretation of the literary classic Of Mice and Men falls slightly short of the mark.

Taught widely on both sides of the Atlantic in its original novella form, Of Mice and Men is about the brutal lives suffered by migrant workers of Depression struck America and their dreams, or more frequently, a feeling of sheer hopelessness.

The inconsistent accents are compensated in a few instances by performances of considerable, heart-wrenching sincerity. Colin Connor convincingly plays bully Carlson with a nuanced vulnerability and Kieran Hill steals the show for his sensitive handling of Lennie. The ‘star’ of the show was set and lighting designer Ciaran Bagnall.

The walls behind the audience had wooden planks fixed to them and from the ceiling dangled long strands of rope. Furthermore it would seem the audience is thrusted into the ranch itself, which effectively strangles the ordinary emotional distance between the viewer and performers to forge a wonderfully claustrophobic atmosphere.

Whilst the unrelenting chugging of the smoke machine was perhaps dramatically unconvincing and unnecessary, I suppose it did make the lights look pretty. Like all productions at The Octagon, Of Mice and Men really is a visual feast.

Unfortunately, the impressive set (which one shouldn’t forget to mention includes the Salinas River flowing through the main space) was let down by some clumsy scene changes. Albeit a personal pet hate, blackouts accompanied by excited stage hands and vaguely contextually relevant music seem to be a missed opportunity for something a little more theatrically fulfilling. This, in part, was responsible for the uneven pacing of the production. The dramatically irregular rhythm to an extent robbed impetus from the final scene.

The unusually off-beat execution of the final moments was an interesting choice from Olivier-winning Thacker, which for me personally left the story feeling somehow incomplete. I was left with the impression that this production never really got to the heart of Of Mice and Men, despite a few exceptional performances and undeniably glorious visuals.

Three Stars out of Five Stars