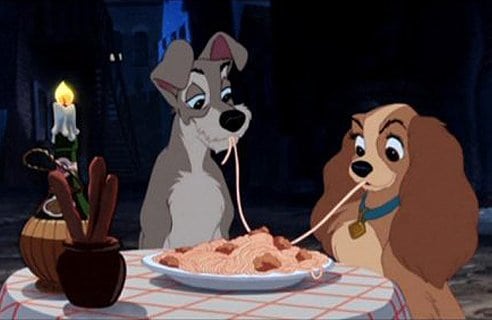 Antonio and his son Bruno, bond over food after a difficult day searching for Antonio’s bicycle. But the waiter informs them they are in a trattoria, not a pizzeria, so Antonio improvises and orders fried bread with mozzarella.

Food is linked to family and wider kin throughout The Godfather. Even when on ‘business’ Clemenza manages to mention food, with the famous line, “Leave the gun, take the cannoli.” The references don’t end there, with the gang relaxing in their spare time, as Clemenza explains the secret to his spaghetti sauce and imparts valuable life lessons to Michael Corleone.

FGT is ripe with images of food, the most memorable being a food fight between Ruth and Idgie, a sequence director Jon Avnet has described as symbolic of a sex scene.

First dates rarely go better: the moons in the sky, Tony’s romantic music is blazing and there’s a steaming bowl of fresh spaghetti to share. Not to mention the eponymous Tramp proving he’s a keeper by offering a blushing Lady the final meatball.

In this Spanish Civil War-set fantasy, heroine Ofelia finds a table laden with glazed hams, glistening jellies and sumptuous tarts. Though forbidden she cannot resist taking (somewhat inexplicably) a couple of grapes, leading to one of the most chilling sequences of the film.