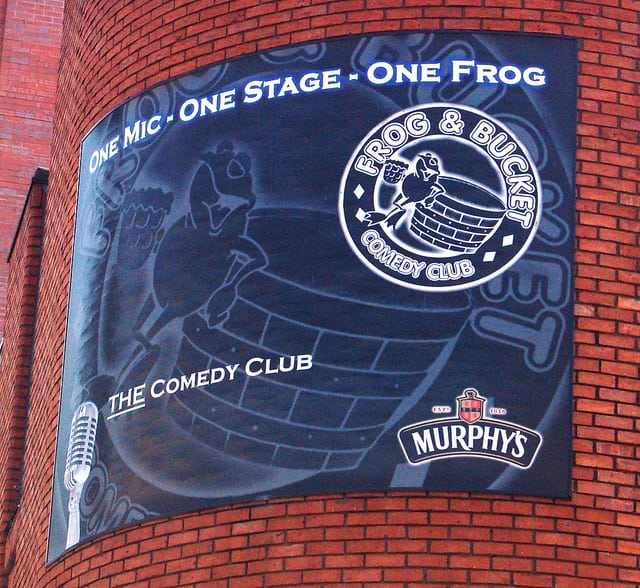 ‘Improdigy’ at Frog and Bucket brings laughs, but not plenty of them

The rather oddly named Frog and Bucket is a comedy club situated at the scruffy end of Oldham Street in the Northern Quarter. Established comedy acts have been road testing new material over the past couple of weeks, the improvised comedy troupe Improdigy being one of them.

The troupe is made up of four rather over-excitable theatre types, game to make you laugh at any cost.  As an improvised comedy virgin I wasn’t sure what to expect, but it turns out audience participation is the name of the game. Results range from great spontaneous gags, to some awkward sideways glances amongst audience members, to agonising silences across the room, when no-one on stage can think of anything witty.

The dodgy compere warmed up the stage for the main act. In terms of sheer effort, the troupe deserved a pat on the back, but it was clear to all they needed to keep practicing.  Two hours later and after a fair few seriously unimaginative suggestions from the crowd, predictably along the lines of sex, paedophilia and genitals, I was all improv-ed out, but had had many laughs along the way.

The venue itself is dimly lit and dingy in a tacky but charming way. The faces of big name acts who had once started out here adorn the walls and give the feeling that you could be in the presence of the next big thing.

Improdigy probably aren’t it. However, if you fancy a cheap evening out, and can be bothered to trek out to the Northern Quarter on a Wednesday evening, you can’t go far wrong with some improvised comedy at the Frog and Bucket. Although be sure to have a few bevvies beforehand (the drinks at the bar are pretty overpriced) to loosen the tongue for some serious heckling.

Editor’s note: The original image used for this post, of the Slap and Giggle comedians, has been removed. Slap and Giggle are not connected to the Improdigy troupe and the editor apologises for suggesting this through the use of the photograph.